An Indonesian migrant worker without valid document has been hiding in a forest since a crackdown on illegal migrant workers kicked off on July 1. (Photo by Alex Ong)

Indonesian activists supporting migrant workers have called on the Malaysian government to avoid "a coercive and repressive approach" to their crackdown on illegal migrants, which kicked off this week.

Wahyu Susilo, executive director of Migrant Care, a Jakarta-based non-government organization, issued a statement calling on the government not to conduct such intimidating raids on undocumented migrant workers.

"Every effort to enforce the law must be based on human rights standards," he said.

Susilo said the raids, which are conducted by immigration, police officers and members of the Malaysian Volunteer Corps, a paramilitary force, tended to exhibit "racism, xenophobia and discrimination," often involving "seizures of an individual's freedom and belongings."

A total of 1,509 illegal migrant workers from Bangladesh, Indonesia, Myanmar, the Philippines, Thailand and other countries were arrested in the crackdowns, as of July 3. Another 156 were arrested in two raids that ended in the early hours of July 5.

Malaysian authorities provided migrant workers without valid documents a window to change their status by registering at the immigration department from Feb. 15 — when the enforcement card (E-card) was launched — until June 30.

Susilo lamented the Malaysian government's failure to meet the target for the E-card system of 600,000 foreign nationals working illegally in the country. Only around 155,000 registered themselves.

"Some 22,000 undocumented migrant workers from Indonesia joined the program. So now hundreds of thousands have become targets of the Malaysian authorities," he said. 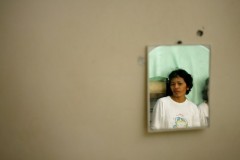 Migrants suffer in silence in Malaysia

"They come from Kupang town as well as Belu and Ende districts in East Nusa Tenggara province. We returned them home last week in cooperation with the social department. Many had worked in Malaysia for more than 10 years," said the nun.

"I often remind those wanting to work overseas that they must be legal migrant workers. If not, they will face the consequences," she added.

Alex Ong, Migrant Care's representative for Malaysia, said illegal migrant workers from Indonesia, who couldn't find jobs back home, have hidden themselves in forests since the crackdowns.

"Some hide under bridges. If heavy rains come, they can be swept away by the rivers," he told ucanews.com July 4, adding that he regularly monitored their situation.

Of the arrested migrants, Ong said some Malaysian authorities asked for a fee for their release ranging between 1,500 and 2,000 ringgit (about US$465).

He called on the government of Indonesia, through its embassy, to build a crisis center to help Indonesian illegal migrant workers.

"The immigration authorities are strict in safeguarding national sovereignty. The primary factor for any failure of the the E-card system is the stubborn attitude of employers in not registering their illegal migrant workers," he told The Malay Mail Online.