President does not come close to honoring his election promise to address abuses, they say 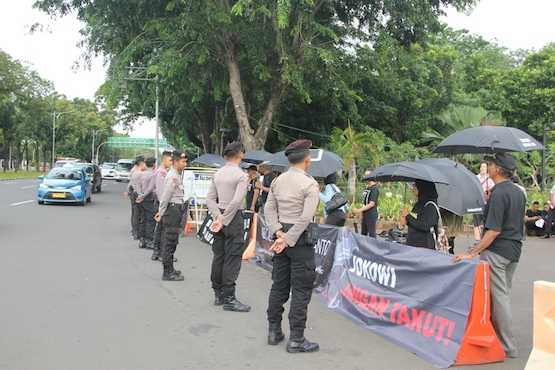 Activists and victims of human rights abuses hold a silent protest every Thursday afternoon across from the presidential palace to urge president to address human rights cases. (ucanews.com photo)

Rights groups have accused Indonesian President Joko Widodo of reneging on an election promise to improve the country’s human rights record, saying after three years in power the situation remains dismal, if not worse.

Three years into his term hardly anything has been done to address human rights abuses, activists said.

"Widodo’s human rights record is very bad, because during his time in office there has been a spike in the numbers being sentenced to death, which goes against his Nawacita promises," Azas Tigor Nainggolan, coordinator of the Indonesian bishops' Advocacy and Human Rights Forum, told ucanews.com on Oct. 25.

He described rights protection as very weak with abuses continuing to occur across many parts of the archipelago, especially in Papua.

Mass arrests of political activists in Papua have continued to occur during Widodo’s presidency, albeit less frequently, Nainggolan said.

He called on Widodo to find the courage to settle past human rights abuse cases by cracking down on violations allegedly being committed by the military and police.

Muhammad Nurkhoiron, a commissioner of the National Human Rights Commission, accused Widodo of not taking his commitment to improving human rights conditions seriously.

"His government focuses [too much] on economic and infrastructure issues," Nurkhoiron told ucanews.com.

Bedjo Untung, chairman of the 1965 Murder Victims Research Foundation, said he and other victims of the anti-communist purge that killed hundreds of thousands of people in the 1960’s are disappointed.

"There has been no improvement in the past three years. In fact, human rights violations have increased," he alleged.

Recent allegations of a resurgence in communist activity in Indonesia are not only a threat to victims of the purge but also to activists who have been accused of pro-communist leanings just for advocating people’s human rights, he said.

The Indonesian government still upholds the blasphemy law, which has been used recently to victimize at least 16 people, including former Jakarta governor Basuki Tjahaja Purnama, he said.

Prosecution of minority groups still continues unabated, he said, pointing to attacks on the Muslim Ahmadiyya sect in Lombok and the refusal by local authorities to allow members of the Indonesia Christian Church Taman Yasmin in Bogor, West Java, and the Batak Society Christian Church Philadelphia in Bekasi from worshipping in their churches.