Proposed law panders too much to big firms, leaves people and environment vulnerable, they say 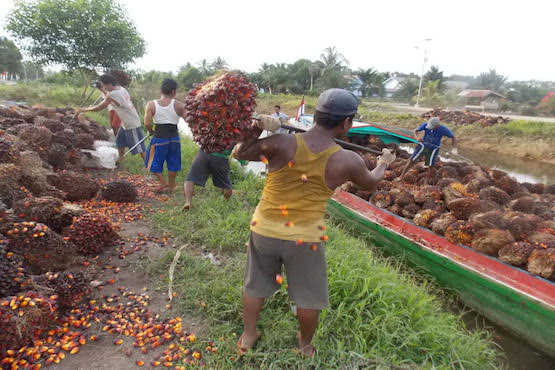 Workers load palm fruit onto a boat in Kalimantan, in Indonesia. (Photo supplied by the Palm Oil Farmers Union)

Indonesian activists and church people have reacted angrily to a draft bill set to go before legislators aimed at regulating the palm oil industry, saying it panders to large scale palm companies and fails to protect people’s rights and the environment.

The bill is scheduled to be discussed in the Indonesian parliament and likely be passed into law later this year.

The legislation has been drawn up to regulate the industry, especially large firms, which have come in for some heavy criticism from rights and environmental groups, as well as the Catholic Church over alleged environmental destruction and the marginalization of poor and indigenous people.

Palm oil plantations in Indonesia cover more than 12 million hectares, of which 7 million are company owned, and the rest by the government and small farmers.

Critics of the industry say the proposed law is seriously flawed and will fail to give the protections it is supposed to provide.

Inda Fatinaware, executive director of environmental group, Sawit Watch, said many articles in the draft overlap and will give more room for companies to violate other laws including deforestation.

“It does not care about the welfare of farmers and workers, and has the potential to exacerbate social conflict,” she told ucanews.com on Jan.4.

“It also does not aim to overcome land conflicts, which often occur between indigenous people and companies,” she said.

Mansuetus Darto, director of the Palm Oil Farmers Union, said small farmers object to the draft, as it mitigates sanctions on corporations that violate laws.

According to existing Indonesian criminal law, environmental destruction and neglecting the rights of employees carries a five-year prison term and a fine of US$380,000.

“We fear the proposed law will be abused by big companies to establish palm oil plantation in peatlands,” he said.

“It [the draft bill] should be rejected because it does not help small farmers,” he added.

Sacred Heart Father Anselmus Amo, who heads Merauke Archdiocese's Justice, Peace and Integrity of Creation Commission said Indonesia does not need special law for the palm oil industry because it already has a plantation law.

“I’m afraid it will provide more opportunities for large scale plantations in Papua,” he said.

Antonius Sido, 46, a farmer in North Kalimantan province, said if the draft is passed, more small farmers would fall victim to land annexation.

“I disagree with the draft because we will lose our land and be more exposed to flooding because of deforestation,” he told ucanews.com.

Some legislators, however, are trying to allay concerns.

Hamdhani, who sits on a parliamentary committee overseeing agriculture, told reporters recently the rights of both farmers and palm oil companies would be taken into consideration during the bill’s reading and article could be amended, without providing further details.

He said palm oil is a big industry and about 30 million people work in the sector. In 2016, it contributed about US$20 billion to the national Gross Domestic Product.

The new law, he said, would help the government in regulating an industry that contributes greatly to the national economy.