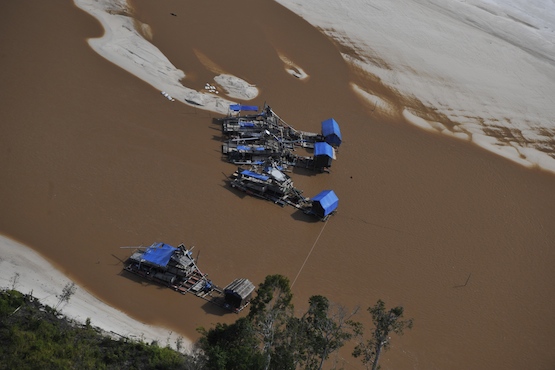 This aerial file photo taken in June, 2012 in Central Kalimantan province in Indonesia's Borneo island shows an illegal gold mining operation on a river where miners' use of mercury pollute the river and land causing environmental devastation, posing risk to health and poisoning communities. (Photo by Romeo Gacad/AFP)

Jumanin is still struggling to come to terms with the tragic deaths of two family members in quick succession.

Her mother died in March 2015 after a long illness, and her grandfather died last year.

She said their deaths were caused by unclean water that has been contaminated by mercury.

Jumanin and her family live in a house just 200 meters from a small-scale gold mine in Pelangan, a village in West Nusa Tenggara province's West Lombok district.

Many members of her family, including her father, are artisanal miners who use mercury to extract gold from ore.

As a result, many of the miners, including her father, are now experiencing heath problems.

"I often see my father having difficulty in breathing," Jumanin said, adding that she fears he too could suffer a similar fate to her mother and grandfather.

Many people are still unaware of the danger of mercury, despite moves of late by the government to curb its use.

In Kujangsari, a village in West Java, Lilis Jasmin Parisa admitted to not realizing that mercury had caused birth defects in her son.

"Not until I was told so," said Parisa who also lives in a house located next to a gold processing site, where mercury is also commonly used. Mercury is highly toxic to human health, posing a particular threat to the development of a fetus and young children, according to the World Health Organization.

Ingestion of mercury has harmful effects on the nervous, digestive and immune systems, the lungs and kidneys, and can be fatal.

Illegal use of mercury

Mercury has been used in Indonesia since the 1990s, largely imported from other countries. Besides the mining sector, it is also used for medical-devices, dental fillings and as a cosmetics ingredient.

But in 2014 the Trade Ministry banned its import, trade and use in the mining sector.

However, a report released issued in June by Denpasar-based BaliFokus, an NGO campaigning for a toxic-free environment, surprised everyone.

It revealed Indonesia had become one of the world's largest mercury producers and exporters in 2015-2016, exporting 635 tons of mercury to 13 countries.

"The production and export of mercury are [mainly] illegal," said Krishna Zaki, the group's toxic program manager, adding that transactions were not recorded in official reports of the Indonesia's Central Bureau of Statistics.

He also said there are around 850 small-scale gold mining sites, mostly illegal, in the country.

"Many miners still use mercury illegally," he noted.

According to the Environment and Forestry Ministry, there are more than 250,000 artisanal miners throughout the country.

The United Nations Environment Program (UNEP) says small-scale gold mining is responsible for 37 percent of global mercury emissions and is the largest source of air and water pollution.

Dwi Sawung, a campaigner for the Indonesian Forum for the Environment, said mercury has seriously damaged the environment, pointing to Buru Island, in the Maluku Island chain.

"Local people cannot fish or farm anymore after a gold mining site was established on the island," he said.

"We sent water samples last year and in March this year to laboratories. The results show the water is contaminated by mercury," said Divine Word Father Frans Sani Lake, coordinator of the church's Justice, Peace and Integrity of Creation in Kalimantan.

Realizing its hazardous impact on gold miners and their families, President Joko Widodo in March banned the use of mercury at small-scale gold mining sites across the country.

This was followed on Sept. 13 by the ratification of the Minamata Convention on Mercury, a global treaty that protects human health and the environment from the adverse effects of mercury.

The ratification of the convention, which was adopted in Oct. 2013 by 128 countries, came a month after the convention officially took effect. The first summit involving countries that adopted the convention was held Sept. 22-29, in Geneva, Switzerland.

"The ratification aims at encouraging industrial and health sectors not to use mercury," Environment and Forestry Minister Siti Nurbaya Bakar said.

However, environmentalists said ratification is not enough and must be followed up by concrete measures.

"The government must immediately introduce stronger laws and strictly implement them," Zaki said.

The government must make sure that mercury is completely out of the reach of small-scale gold miners, he said.