Indonesia to bring stranded Rohingya refugees to shore after protests

Indonesia had denied refuge to at least 100 people, mostly women and children, aboard a stricken wooden vessel 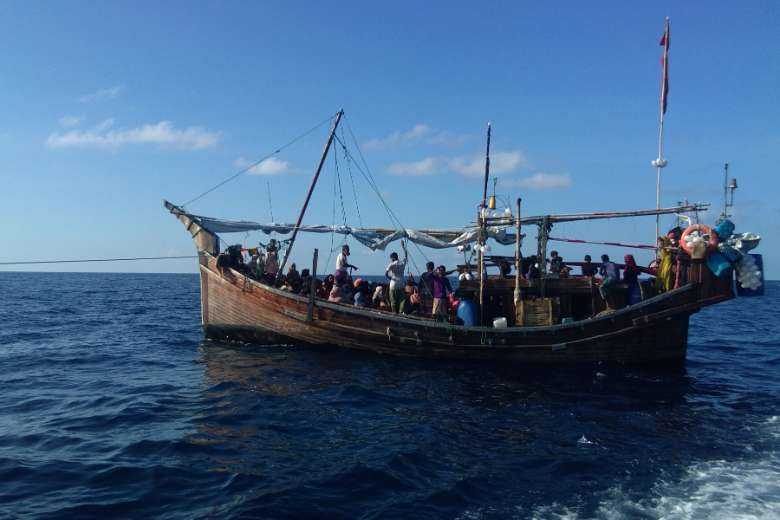 This photo taken on December 27, 2021 shows a wooden boat transporting Rohingya refugees after it was intercepted in the waters off Bireuen, Aceh province and were denied refuge in Indonesia. (Photo: AFP)

Indonesia on Wednesday said it will let dozens of Rohingya refugees come ashore after protests from locals and the international community over its plan to push them into Malaysian waters.

At least 100 mostly women and children aboard a stricken wooden vessel off Aceh province were denied refuge in Indonesia, where authorities on Tuesday said they planned to push them into the neighbouring Southeast Asian country after fixing their boat.

After a day-long meeting on Wednesday between officials in the coastal town of Bireun, Jakarta backtracked and said the refugees' boat would be towed to shore on humanitarian grounds.

"The decision was taken after considering the emergency condition of the refugees on that boat," said Armed Wijaya, head of the national taskforce on refugees.

The Rohingya boat is now about 50 miles (80 kilometres) from Bireun and would be pulled ashore, he said without elaborating on the timing.

"As it is now in the middle of the pandemic, all refugees will undergo medical screening," he said, adding that the taskforce will coordinate with related stakeholders to provide shelter and logistics for the refugees.

Indonesian authorities first spotted the wooden boat two days ago, stranded about 70 nautical miles off the Indonesian coast, according to a local navy commander. Local fishermen had alerted them on December 25, one of them said.

On Tuesday, Amnesty International and the UNHCR called on the government to let the stranded group of Rohingya refugees land.

The earlier plan by authorities in Aceh to send the refugees into Malaysia also angered locals in Bireun, where a group of fishermen on Wednesday organised a protest demanding authorities to instead allow the Rohingya to disembark.

"We saw videos of their condition on social media. They need water and food. They must be treated with kindness as human beings," Bireun resident Wahyudi told AFP by telephone.

"We, Acehnese, used to have the same experience with the Rohingya. We were in a prolonged conflict. We fled crossing the sea and were helped by people from various countries such as Malaysia, Australia."