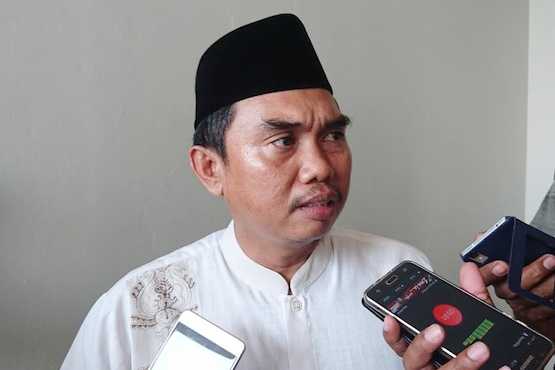 Abdul Kadir Arif, a Muslim cleric in the city of Merauke, Papua province, thinks the security presence for the upcoming local elections is excessive. (Photo by Eman Riberu)

Ten districts and one municipality in Papua will elect new leaders on Feb. 15.

Four of the 10 districts — Puncak Jaya, Lanny Jaya, Nduga and Tolikara — are on high alert following recent incident's of violence.

A small-scale insurgency has plagued the province over the past few decades by groups unhappy with Indonesian rule.

On Sept. 24 last year, two soldiers and a civilian were injured in a shooting in Puncak Jaya district.

Papua has a total population of 3 million, 65 percent of whom are Protestant, 17 percent Catholic, 15 percent Muslim, while the remainder are mostly Hindus and Buddhists.

In neighboring West Papua a gubernatorial election will take place the same day.

Papua police chief Paulus Waterpauw said more than 2,700 police officers will be on election duty, while local military commander Hinsa Siburian, said about 2,500 troops will be on hand to see that the elections pass off peacefully, especially in the four red-flagged districts.

The military fears the elections could turn nasty and are does not want a repeat of elections five years ago in Lanny Jaya and Tolikara, when disputes over the results triggered tribal violence that saw one person killed.

Religious and tribal leaders in Papua, however, say the deployment of so many security forces is excessive.

They feel such a heavy security presence during the election would lead to misunderstandings.

"The government, military and police should have been more active in providing people with more political awareness, rather than deploying large numbers of security forces," said Abdul Kadir Arif, a Muslim cleric in the eastern city of Merauke.

"I hope they maintain neutrality and keep the peace during the elections," he said.

John Gobay, chairman of a local tribal council, said residents are uncomfortable when they see lots of armed military and police personnel wandering the streets.

"Deploying heavily armed people for fear of armed groups is the wrong approach and could fuel another problem," he said.

"The biggest threat comes from the candidates who are incapable of controlling their supporters, and even use them to achieve evil goals," he said.

Father Miller Senduk, vicar general of Merauke Archdiocese, has reminded people to respect other people's opinions, and avoid becoming involved in vote buying as it is detrimental to democracy.

"Let us hope for leaders who love their people, will not abuse power and who are committed to justice," said Father Senduk.

Good leaders also include candidates who can admit to defeat in an election, he added.