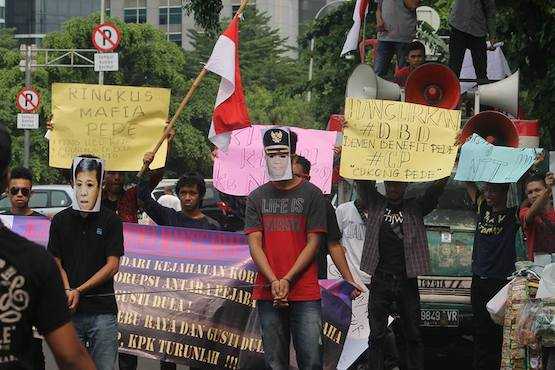 Students from Flores in East Nusa Tenggara hold a rally in Jakarta on May 16 before filing a complaint about a hotel license to the Corruption Eradication Commission. (Photo supplied)

Students from East Nusa Tenggara have cried foul over a hotel building permit issued by the province's Catholic governor.

They filed a complaint with the Corruption Eradication Commission on May 16 about Governor Frans Lebu Raya and West Manggarai district head, Agustinus Ch Dula — both Catholics — who issued a building permit amid financial irregularities.

House Speaker PT Sarana Investama Manggabar received the permit in 2014 for a 4.2-hectare plot on Pede Beach in Labuan Bajo, West Flores. His hotel is already under construction.

Yulianus Ario Jempau, the students' coordinator told ucanews.com on May 17 that funds from the company were not sent to the provincial government's bank account but directly to the personal account of Governor Lebu Raya.

Jempau said that it was "an indication of the intention to enrich himself. We suspect that the payment made him push through the permit. Therefore, we request an investigation."

Ovan Wangkut, another student, said filing the report was part of an effort to crack down on corruption in East Nusa Tenggara, one of the most corrupt provinces in the country according to the Indonesia Corruption Watch survey.

"Corruption is very worrying but law enforcement is weak so we took this step," he said.

Lin, an official at the Corruption Eradication Commission, said they would try and trace the flow of funds between the investor and local officials.

Governor Lebu Raya denied the allegations and claimed that "the hotel's construction is to provide revenue for the region."

Meanwhile,  Bishop Hubertus Leteng of Ruteng, who supported the students, said the government must listen to the demands of society. "Pede Beach is the only coastal area in Labuan Bajo that is still freely accessible after others were privatized," he said.

"We do not reject investment but we cannot accept the local community being marginalized and losing important recreation space for the sake of business," he said.

Ruteng Diocese was one of the initiators of a protest against developing Pede Beach after its 2015 synod decided that the church should encourage tourism development in Labuan Bajo but local communities must also be provided with free access to coastal areas.