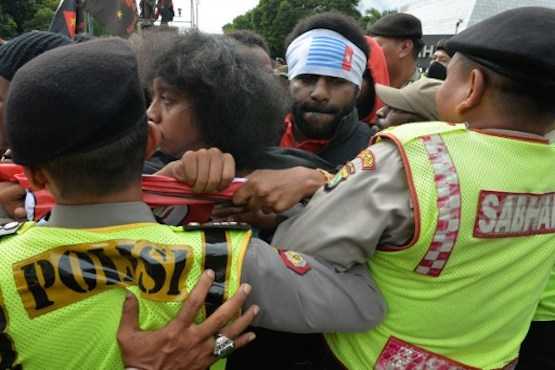 Papuan protesters are stopped during a protest in Jakarta in this Dec. 1, 2016 file photo. The protesters were rallying against Indonesian rule over the eastern provinces. (Photo by Bay Ismoyo/AFP)

An Indonesian Foreign Ministry official has confirmed the government has maintained a secretive interagency "clearing house" that has long obstructed foreign journalists from traveling to the provinces of Papua and West Papua, despite promises to shut it down.

According to Human Rights Watch, Ade Safira, the director of the Ministry of Foreign Affairs' Civil and Political Rights Protection division, said the clearing house continued to vet requests of foreign journalists and researchers who want to travel to the two provinces, referred to as "Papua."

He said the body makes its decisions in consultation with the Papuan provincial government.

Safira's comments contradict assurances of Siti Sofia Sudarma, director of information and media at the Ministry of Foreign Affairs, who told Human Rights Watch in August 2015 that the government had "liquidated" the clearing house, while still requiring a police permit for foreign media to visit Papua.

Sudarma had said the move was in line with a May 2015 oral directive from President Joko Widodo to lift official restrictions on foreign media access to Papua.

Jokowi failed to signal the policy change in writing, creating a policy ambiguity that has enabled government and security forces to continue to restrict foreign media from Papua.

Activists have long complained about rights abuses being meted out on Papuan civilians and pro independence activists.

Some foreign journalists who have traveled to Papua with official permission since May 2015 have complained of visa blacklisting for reporting that displeased the Indonesian government and the harassment and intimidation of Papuan sources, the rights group said.