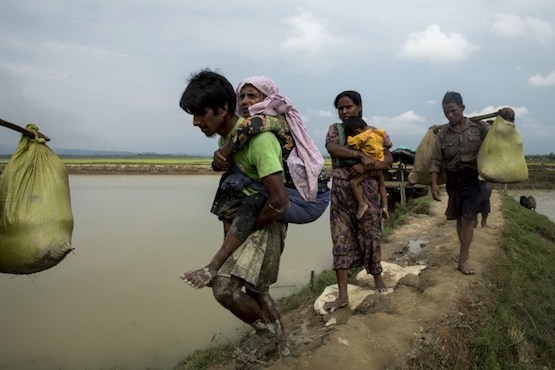 The Indonesian government has stepped up its support for ethnic Muslim Rohingya promising humanitarian aid and a new hospital in their homeland in Myanmar's Rakhine State as the military continues to torch villages while battling homegrown insurgents.

Indonesia is one of many Muslim nations voicing anger at Myanmar's treatment of the Rohingya who number as many as 1.3 million mainly in Rakhine State.

"Concrete actions, instead of denouncements, must be taken. The Indonesian government commits to provide aid in the humanitarian crisis by creating a synergy between Indonesian people and the international community," Indonesia's President Joko Widodo told reporters Sept. 3 at the presidential palace in Jakarta.

"The violence and crisis must be ended immediately," he said.

Widodo said Indonesia would begin lobbying U.N. Secretary-General Antonio Guterres and Chairman of Advisory Commission on Rakhine State Kofi Annan, as well as the Myanmar government to end the crisis and to grant access to humanitarian aid which was blocked once more last week.

Myanmar's military says around 400 people have been killed in Rakhine State as more than 90,000 have scrambled to get into Bangladesh in just the past week. The military's action follows a series of deadly attacks by Rohingya militants against Myanmar government posts on Aug. 25.

Already, the crisis is causing ructions at the street level in Indonesia. A Molotov cocktail was thrown by an unidentified man at the Myanmar Embassy building in Menteng, Central Jakarta causing a small fire on Sept. 3. A day earlier, a group of people staged a rally in front of the building to urge the Nobel Prize Committee to withdraw its peace prize from Aung San Suu Kyi.

Indonesia Foreign Affairs Minister Retno Lestari Priansari Marsudi has flown to the Myanmar capital of Naypyitaw to discuss aid to Rakhine State and the construction of a hospital there beginning October.

Marsudi, who will also meet Myanmar State Counselor Aung San Suu Kyi and several officials, said the trip "brings along the Indonesian people's mandate to help resolve the crisis and also the international community's hope that the crisis will end soon." "It should focus on humanitarian aid, indeed. Never blame the crisis on certain religions as no religion teaches its followers to kill others," Sendjaja told ucanews.com.

Sendjaja believed that social, economic and political problems were behind the crisis. "Religions are just being misused," he said.

Father Paulus Christian Siswantoko, executive secretary of the bishops' Commission for Justice and Peace, said the Indonesian government should show the international community that "we are dignified nation and not reactive."

"We can see the crisis clearly. This is about humanity," Father Siswantoko said.

However, the priest hoped that the Indonesian government would work together with other Asian countries to lobby the Myanmar government to treat Rohingya humanely. "More countries mean more voices," Father Siswantoko said.

Hendardi, chairman of the Jakarta-based Setara Institute for Democracy and Peace, said the Indonesian government should lead the world in dealing with the crisis.

"It is a humanitarian tragedy which ethically and politically draws the international community's attention to take part in delivering humanitarian aid," said Hendardi. "ASEAN member states cannot stay silent because of their principal of respecting Myanmar's sovereignty," he said.