People rally against money politics and the use of ethnic, religious and racial sentiments in elections. (Photo supplied by Bawaslu)

To prevent sectarian conflict ahead of this year's regional election, the Indonesian election authority in cooperation with religious leaders is working on a set of guidelines for sermons, which will be distributed to all religious organizations.

About 160 million voters will head to the polls during regional elections on June 27 in 171 regions — to elect 17 governors, 39 mayors and 115 district heads. Campaigns officially started on Feb. 15.

Fritz Edward Siregar, an official of the Election Supervisory Commission, said the agency had invited religious leaders to help formulate the guidelines for religious groups.

They aim to prevent sectarian sentiment and "money politics" as parties to unethically bolster their lists of candidates, he said.

"The sermon can be used as a guideline for Protestants, Catholics, Muslims, Buddhists, Hindus and Confucians," he told ucanews.com on Feb. 14.

He said the agency got religious leaders involved to enlighten people, particularly those that lack a proper understanding of democracy. It will be included in the programs of candidates when they campaign.

"We hope to minimize that tension through good sermons," he said.

During the election, sectarian issues were capitalized on to oust former Christian governor Basuki Tjahaja Purnama, who was accused of blasphemy and failed to win re-election.

A series of rallies by Muslim groups including radicals were held and caused divisions among city residents. 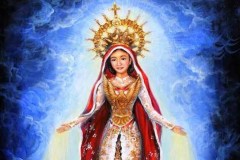 Father Yohanes Ruse, executive secretary of the Indonesian Bishops' Liturgy Commission, said he agreed with the initiative by the election supervisory commission.

However, he said the guidelines are more like a pastoral letter in the Catholic Church, not a sermon.

A sermon is an internal affair for each religion and the Catholic Church has banned church pulpits as a political campaign venue, he said.

"The bishops issued a pastoral letter in 2017. Through that, they called on Catholics to open themselves up, build dialogue with other religions and prevent religious fanaticism for true brotherhood," he told ucanews.com.

The bishops hoped Catholics would not find themselves divided by politics or influenced by sectarian campaigns.

Masdar Masudi of Nahdlatul Ulema, the biggest Islamic organization in Indonesia, said the guidelines were needed for a healthy election.

"Like it or not, people will use the pulpits of worship as a venue to agitate and send political messages with ethnic, religious or racial sentiments, which can destroy people's good relations," he said.

He also called on mosque officials to issue rebukes if people, candidates or supporters are found to be using mosques to broadcast negative campaigns.

Rev. Jeirry Sumampow, a spokesman for the Communion of Churches in Indonesia, said even though it is not the commission's job to issue sermons the initiative is a good one that deserves support.

"The commission's effort encourages religious institutions to pay serious attention to ethnic, religious and racial sentiment, as well as money politics. Those things destroy our democracy," he said.

Sectarian sentiment is increasingly strong and regional election organizers are taking preventive measures to stop it from destroying the country, he said.

Lucius Karus, a political analyst, hailed the policy as a breakthrough and hoped it would promote change.

He said sermons are effective in influencing people.

"That's why there is a need for guidelines for sermons, so preachers can help people to better understand what it means to work together in society," he said.

Markus Septiyanto, a private employee who lives in West Jakarta and was affected by sectarian tension during last year's gubernatorial election, said involving religious leaders in elections was a good move.

"They play a very important role in leading the people," he said.