Indonesian police are seeking an Interpol red notice for the arrest of a Christian YouTuber who has sparked outrage among Muslims for claiming to be the 26th prophet.

The move follows calls by Muslim groups for Jozeph Paul Zhang, 40, to be prosecuted for blasphemy. Muslims revere Muhammad as the 25th and last prophet.

Zhang, who claims to be a Protestant pastor, made the claim in a video uploaded on YouTube last week. He also made remarks about the holy month of Ramadan that Muslims say they found offensive.

“He was named yesterday as a blasphemy and hate speech suspect,” police spokesman Brig. Gen. Rusdi Hartono said in a statement on April 20. He said it is believed Zhang is in Europe.

Commissioner General Agus Andrianto, who heads Indonesia’s Criminal Investigation Department, said an arrest warrant has been issued and Interpol has been asked to issue a red notice for Zhang.

“We are waiting for Interpol’s approval,” he said.

If a red notice cannot be issued by Interpol, we “will seek government-to-government or police-to-police cooperation,” he said.

The video posted online, which has gone viral, has been roundly condemned as inflammatory by religious groups including Catholics.

“We have an obligation to support the police’s move to arrest him. This is a case for the police and state to show commitment to maintaining diversity by bringing all such blasphemy cases to court,” he told UCA News on April 21. 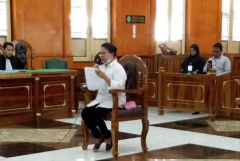 Under the law, a person can be jailed for up to five years if convicted of blasphemy.