Joko Widodo, thought by most to be the winning candidate, faces the media on election day. Picture: AFP Photo/Romeo Gacad

The Rev Andreas A Yewangoe, chairman of the Communion of Churches in Indonesia, told a press conference in Jakarta on Thursday that the candidates must "obey the election's results".

"[We] call on all parties … to be ready to win or to lose, and to restrain themselves from an excessive degree of euphoria which can cause conflicts among different groups and has a potential to disunite the nation," he said.

The religious leaders called on the General Election Commission to conduct the vote counting process in an honest, fair, professional and transparent way.

"Stay away from fraud and pressures so that the official results can be announced ... and accepted by all Indonesian people," he said. Christians have much at stake as Indonesia goes to the polls 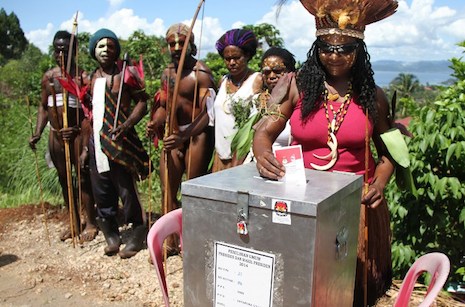 The election commission will announce the official results on July 22.

Eleven agencies publicized unofficial results of their quick counts a few hours after the presidential election ended at about noon on Wednesday.

Both camps have sent hundreds of thousands of monitors to carefully watch the count in a country where vote-buying and the bribing of government officials is rampant, AFP reported.

"The most vulnerable part of the Indonesian election is the counting process," Jakarta-based independent analyst Paul Rowland told AFP.

Analysts believe that Widodo, known by his nickname Jokowi and seen as a breakaway from the autocratic Suharto era, has the more credible claim to victory, and as such is the most vulnerable to being targeted by fraud.

At least eight polling agencies said he was leading Prabowo, a top military figure during the Suharto era, by between two and seven percentage points.

Jesuit Father Franz-Magnis Suseno, of the Jakarta-based Driyarkara School of Philosophy, told ucanews.com that Indonesians should wait for the official result before reacting.

"If not, the potential for hostility and anarchic acts among supporters of both presidential candidates will get stronger," he said.

"Both [candidates] should be able to restrain themselves and not create excessive tension between their supporters and any movements in the field which are really prone to horizontal conflicts," he said.

Meanwhile, Hamdi Muluk, a political analyst from the University of Indonesia, said the threat of potential conflict would be eliminated if the election commission worked professionally.

"But tension may be there if fraud is found. There's a polarization between supporters of Jokowi and Prabowo. Those suffering a loss will react strongly. The situation will get worse if the government lets fraud happen," he told ucanews.com.

Around 250,000 police officers and 23,000 military personnel have been guarding conflict-prone areas since the election.

"We need to stand by. The police officers and military personnel will keep working until the commission announces the official result," Inspector-General Ronny F Sompie, the National Police spokesman, told ucanews.com.