Indonesia is said to be denying refuge to some 100 people, mostly women and children 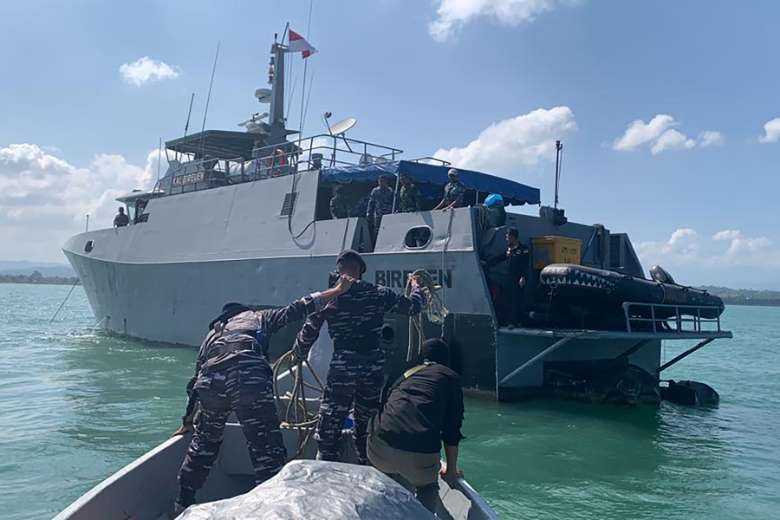 This handout photo taken and released on December 29, 2021 by the Indonesian Navy shows sailors bringing supplies to a navy ship destined for Rohingya refugees after their boat was intercepted in the waters off Bireuen, Aceh province and were denied refuge in Indonesia. (Photo: AFP)

Dozens of Rohingya refugees intercepted after their boat ran into trouble off the coast of Indonesia's Aceh province were being sent into Malaysian waters, authorities said on Tuesday.

At least 100 mostly women and children aboard a wooden vessel said to be taking on water were denied refuge in Indonesia and instead pushed into the neighbouring Southeast Asian country.

Despite calls from non-governmental organisations and the United Nations agency for refugees, Indonesian authorities are attempting to send the group back after providing supplies, clothes and fuel, as well as a technician to fix their damaged boat.

"We hope (the supplies) can help the Rohingyas to continue their journey to Malaysia as they planned and intended," Winardy, an Aceh police spokesman who, like many Indonesians, goes by only one name, told AFP.

"We will monitor them until they reach their destination," he said.

The wooden boat was first sighted two days ago, stranded about 70 nautical miles off the Indonesian coast, according to a local navy commander.

Indonesian authorities have not pushed back Rohingya refugees as strongly as Malaysia or Thailand, instead reluctantly accepting them upon arrival by sea.

But Amnesty International and the UNHCR have called on the government to let the stranded group of Rohingya refugees land.

"This is about life and death. There are women and children, we must pay attention to their health," executive director of Amnesty International Indonesia Usman Hamid said in a statement.

The UNHCR also called on Jakarta to let the boat's passengers disembark, pointing to the unseaworthiness of the boat.

Badruddin Yunus, a leader of the local fishing community, told AFP that fishermen who had visited the boat reported there were 120 people on board, including 51 children and 60 women.

He said the engine was broken and the refugees could not communicate with the local fishermen due to the language barrier.

Many have since escaped to Malaysia, drawn by its substantial population of more than 100,000 Rohingya.