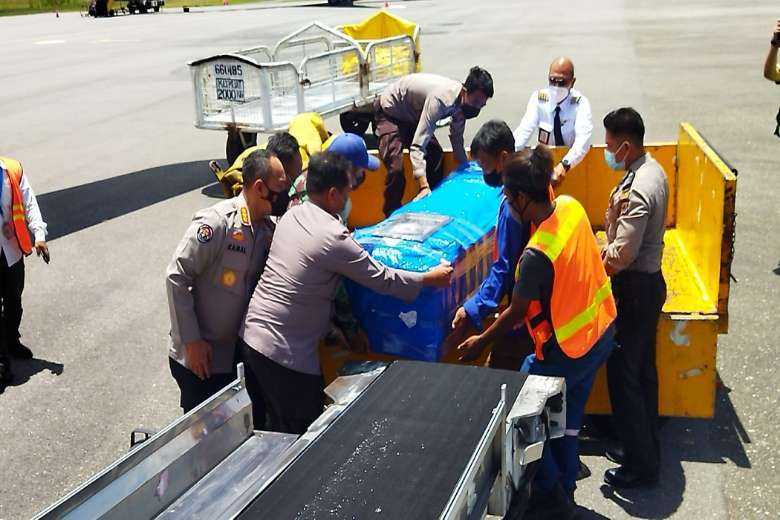 The bodies of eight workers killed by Papuan separatists are flown to their hometowns on March 8. (Photo supplied)

Authorities in Indonesia have recovered the bodies of eight technicians killed by armed separatists in a remote and mountainous district in restive Papua province after having to wait five days due to bad weather.

All eight were working for an agency making improvements to a transceiver station in Beoga in Puncak district when they were attacked and shot on March 2.

The West Papua National Liberation Army and the Free Papua Movement (TPNPB-OPM) admitted responsibility for the shootings. According to the group’s spokesman, the workers paid the price for entering an area which the rebels had previously declared a no-go zone for civilians.

He said the bodies were later flown to their hometowns in the district and elsewhere in Indonesia to be handed over to their families.

“We also held a memorial service to honor the eight workers who heroically lost their lives trying to better develop Papua,” he said.

Senior Commissioner Muhammad Firman, who headed the recovery team, said the recovery of the bodies had to be delayed several times due to bad weather. He said the victims could only be reached by air.

She said there were at least seven attacks by armed separatists in the province in January and February that left 13 dead and five injured.

Amnesty International Indonesia denounced the recent shootings and other attacks against civilians in the province.

“Killings committed by anyone can never be justified and are clearly an insult against the fundamental principles of human rights,” said Usman Hamid, the rights group’s executive director.

He also called on the government to immediately form an independent team to investigate attacks in the province in a thorough, fair and transparent way.

“Suspected perpetrators … must be brought to court in a fair process that must not end with the death penalty,” he said.

MAMOUN ALSABOUNI
Insurgency in west Papua of Indonesia must finish, either with an official reconciliation or with the governmental forces control of the area.
Reply

JULIE
This is Indonesian propaganda news.What are you a hypocrite Javanese Colonialist. The only way to stop this is to end illegal occupation by Indonesian military on West Papua and respect the autonomous rights of indigenous people. Your Javanese nationalist oligarchy has no right to exploit Irian Jaya natural resources and people. Last week human rights watch published a report of your army killing indigenous children there. So if your army doesn't stop they can expect retaliations.
Reply