Leading cleric comes under fire from Catholics, critics after saying country's next top cop must be Muslim Indonesian policemen secure a protest site in this 2019 file photo. Comments by a Muslim cleric that the national police chief must be Muslim have angered Christians in Indonesia. (Photo: Konradus Epa/UCA News)

One of the leaders of Indonesia’s top Islamic clerical body has caused a storm among Catholics after saying the next national police chief must be a Muslim.

Muhyiddin Junaidi, deputy chairman of the Indonesian Ulema Council, reportedly said the position, which becomes vacant in January when present chief Gen. Idham Aziz retires, should not be filled by a non-Muslim.

Even though Indonesia is a secular country, it would not be appropriate if the leader of the police had a non-Muslim background, CNN Indonesia reported him as saying.

Muhyiddin said it was natural for leaders of any country to have the same religion as that of the majority of the population.

The statement has sparked outrage, with critics saying the comments were discriminatory.

Stanislaus Riyanta, a security analyst, said the choice of police chief should be based on who was best qualified and not on what religion the person follows.

"The national police is not a religious institution but a state one that must be neutral and have no bias," he told UCA News on Nov. 30.

Muhyiddin’s comments have riled Catholics since one of the leading candidates to succeed Aziz is a Catholic police officer, Listyo Sigit Prabowo, who currently serves as head of the Criminal Investigation Agency and is a former Banten provincial police chief and aide to President Joko Widodo.

Azas Tigor Nainggolan, from the human rights desk of the Indonesian bishops’ Commission for Justice, Peace and Pastoral for Migrant-Itinerant People, said Muhyiddin's comments showed the determination of certain elements not to allow people from minorities to take up positions of influence.

"It is a pity for non-Muslims because they cannot become high-ranking officials in this country if religious leaders still have that view," he said. "Clerics like this should be punished for spreading intolerance and hatred." 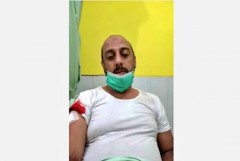 Sintong Sinaga from the Catholic Student Association said every Indonesian citizen is afforded the same rights.

“The Ulema Council should focus on its attention to its own business and not issue statements that could offend other religious communities,” he said.

Poengky Indarti, a member of the National Police Commission which will advise Widodo on the choice of police chief, dismissed the cleric’s comments, saying religion would not be taken into consideration.

"It must be remembered that our country respects religion and upholds diversity," she told UCA News. "Who we will recommend will be based entirely on merit."

Only one non-Muslim has served as the national police chief. Gen. Widodo Budidarmo, a Protestant, served from 1974 to 1978 during the rule of Indonesian strongman Suharto.