Move to bring back up to 6,000 people almost all at one could pose a serious security threat, observers say 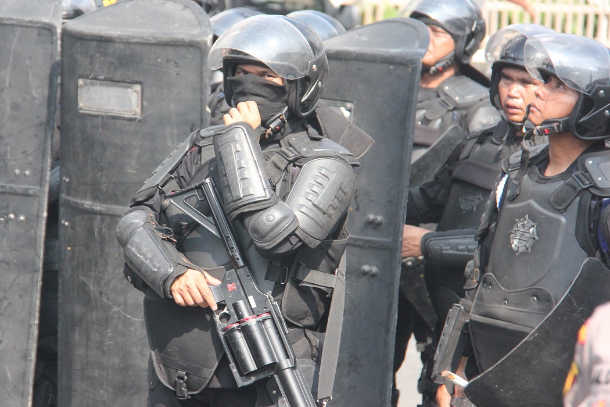 Security experts say Indonesia faces a serious security threat if it tries repatriating thousands of suspected overseas terrorists all at once. (Photo by Konradus Epa/ucanews)

Indonesia plans to repatriate thousands of its citizens who left to join the Islamic State group and other terrorist groups abroad, a senior minister said.

“In Syria alone, there are 187,” national news portal Kompas.com quoted the minister as saying.

“We must bring them back to Indonesia,” he said.

Mahfud’s comments came after a recent meeting with Shigenobu Fukumoto, the head of Japan’s counter-terrorism agency.

Mahfud said the government had been concerned about the FTF issue, including the challenge of bringing them back without posing a threat to national security.

He said this could be achieved through increased cooperation with Japan on counter-terrorism efforts.

Such cooperation would likely include de-radicalization efforts, he said.

“There are many things that we would cooperate on. There would also be a joint team established to discuss terrorism and regional security,” Mahfud said.

Al Chaidar, a terrorism expert from Malikussaleh University in Aceh said militants had left and join groups in various places.

“Besides Syria, they have also gone to Mindanao in the southern Philippines, as well as Thailand, Malaysia and Afghanistan,” he told ucanews on Jan 13.

He backed the Indonesian government’s move to repatriate them and prepare de-radicalization program for them but said it could put a strain on the country's security apparatus.

Stanislaus Riyanta, an intelligence analyst at the University of Indonesia, agreed and said repatriating such a large number all at once posed a real danger for Indonesia.

“If the numbers are true then Indonesia could be in big trouble,” Riyanta told UCA News.

"The government must strictly enforce the law and jail them as they have been involved with banned organizations, and after that they must undergo deradicalization programs," he said.

“If 6,000 people return home at once and are not handled properly, disaster could be the result,” he said.