Facebook page with more than 7,000 members targeting children should be wake up call for authorities to act, activists say 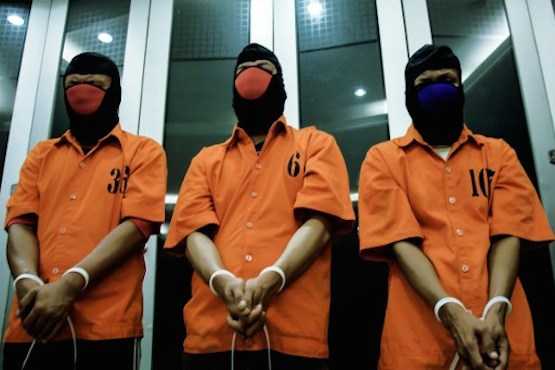 Three suspects are displayed at the national police headquarters in Jakarta in this Sept. 2, 2016 file photo. They were accused of being members of an online pedophile ring. (Photo by Azqa Harun/AFP)

Their fears were heightened last week when Jakarta police announced the arrest of four suspects accused of luring children via Facebook.

The four were arrested in connection with a Facebook page called 'Official Candy's Group' where members shared tips and tricks to lure children, police said.

Two suspects were group administrators while the other two were teenage boys under 17-years-old.

Police said the group was created in 2014 and had more than 7,000 active members, who shared pornographic videos and photos on child pornography.

Some 500 videos and 100 photos containing child pornography was found on the Facebook page, they said.

Last week's arrests follow the arrest of three suspects in September last year in which the suspects were accused of being members of a pedophile ring which hooked up adult men with about 100 mostly teenage boys.

Father Markus Nur Widipranoto, director of Pontifical Mission Works at the Indonesian Bishops' Conference, said the number of members the website had should send out a chilling warning and serve as a wake up call for authorities to crack down on like-minded criminals.

"This is a deeply worrying case," Father Widipranoto said.

The Indonesian Child Protection Commission says the number of sexual abuse cases against children is increasing each year from 256 victims in 2012 to 1,953 last year.

Indonesia has the highest number of recorded pedophile cases in Asia, according to Interpol and Federal Bureau of Investigation (FBI) data.

The church will continue campaigning in cooperation with the Justice and Peace commission, and Commission for Catechetic to protect children from sexual abuse.

"Our commission will continues to coordinate with the police to hunt child predators on social media," Advianti told ucanews.com.

"We are also working to protect the victims and work on their rehabilitation," she added.

Yohana Fransisca, the mother of two elementary school students, said last week's arrests was a reminder for parents to be on their guard.

"I'm always worried not only about my children but also other students because they are targets of predators," said the parishioner of St. Alphonse Parish in North Jakarta.

She said children must be protected because Indonesia looks as if it is a haven for pedophiles, who use social media particularly Facebook to target their prey.

The Ministry of Education said the government has launched a campaign to increase awareness of the dangers posed by sexual criminals.