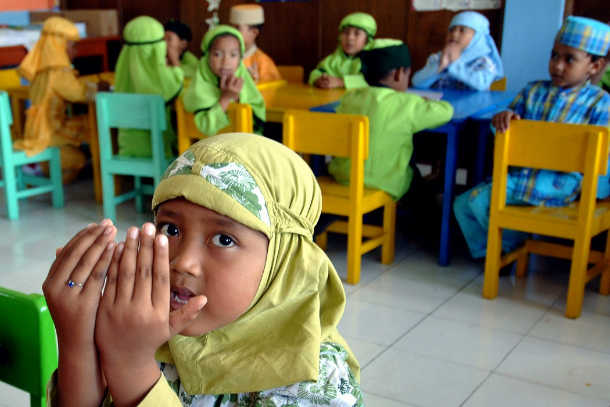 Children pray in a classroom in a school in Denpasar, Bali. The Indonesian government has ordered Islamic schools to stop teaching content that promotes a radical form of Islam. (Photo: Adek Berry/AFP)

The Indonesian government has ordered the removal of content in Islamic school curriculums that it says promotes jihad and supports the setting up of a caliphate.

According to the Religious Affairs Ministry, some Islamic schools or madrasas it runs were found to be teaching such content.

The discovery followed a quick inspection of questions and answers given in exams taken in three East Java districts on Dec. 4.

A day later, the ministry issued a circular calling on schools to remove the content.

The ministry runs 78,000 madrasas from kindergarten to senior high school level throughout Indonesia.

“Every school subject that does not prioritize peace, unity and tolerance must be removed,” he told reporters on Dec. 7. "We want to promote moderate Islamic values."

The order was in line with a 2018 decree issued by the general director of Islamic education to remove content that promoted radical religious teaching, according to Umar.

He said religious education should focus on the life of the Prophet Muhammad, who taught peace, not war.

"We want to prepare our younger generations to maintain peace, unity and tolerance for the glory of Islam in Indonesia," he said.

"This country is based on a national ideology of tolerance. Subjects that go against this must be removed,” said Susetyo, who added that this should apply to all schools, not just Islamic ones, that teach radical ideologies to students.

New Religious Affairs Minister Fachrul Razi is “always looking to discredit Islam and this move shows his opposition to it,” he told ucanews. “The ministry’s role is to protect the Muslim religion, not weaken it,” he added.

Indonesia’s biggest Islamic organizations such as Nahdlatul Ulama have traditionally adopted a more moderate line and have repeatedly backed the government of President Joko Widodo in banning groups that promote a caliphate.

Ahmad Faqih of the Association of Nahdlatul Ulama Teachers in East Java urged the government to immediately revise the curriculum in Islamic schools. He said the fault is not with teachers as they are just teaching what is in textbooks.

"A revision of the existing curriculum and a change of textbooks is urgently needed," local news portal Republika.co.id quoted him as saying.