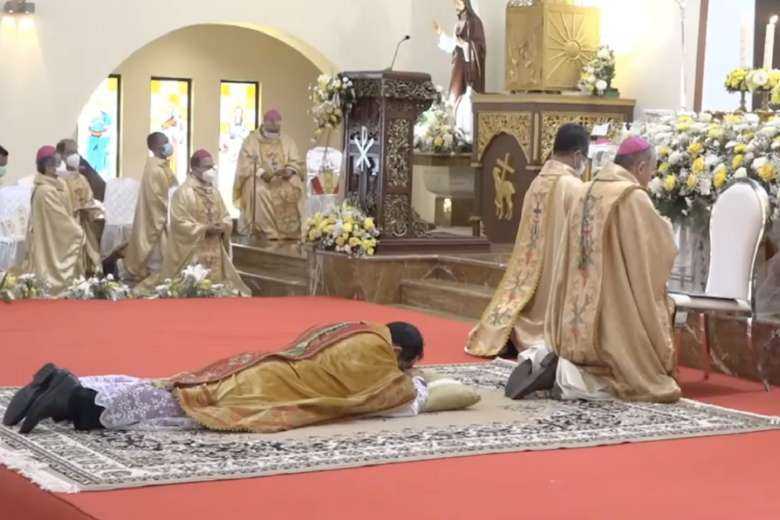 The ordination Mass was held in St. Therese of the Infant Jesus Cathedral in Padang, the provincial capital, and led by Archbishop Piero Pioppo, the apostolic nuncio to Indonesia.

Franciscan Bishop Adrianus Sunarko of Pangkalpinang and Capuchin Archbishop Kornelius Sipayung of Medan concelebrated the three-hour Mass, which was livestreamed on the YouTube channel of the Indonesian Bishops’ Conference (KWI)’s Commission for Social Communications, with 13 other bishops.

Bishop Sunarko highlighted the role of religious leaders in his homily.

“Since the general election back in 2019, we often hear about people who claim to be religious but who in fact show a scary face of religion which threatens religious harmony. We also hear of religious leaders making hate speeches which could incite violence,” he said.

Such people create anxiety within society, he added.

He said Catholics in Padang Diocese should not worry about their new bishop.

“With his episcopal motto, Misericordia Motus [moved by mercy], Bishop Vitus wants to be a religious leader with compassion instead of being authoritarian,” he said.

Archbishop Pioppo called on the newly ordained bishop “to be a shepherd who loves all people, a mentor who is reliable, and a teacher who is rooted to the Word of God and the Catholic Church’s doctrines.”

“Never let your relations with civil servants, your love for the suffering, and your patience to sinners become weak. Stay united in Christ the Good Shepherd and be moved by mercy. Continue to help Christ by guiding all the faithful in Padang Diocese to the joy and the fulfillment in life,” he said.

Bishop Vitus thanked all Catholics for giving him a chance to learn how to become a good shepherd.

“As a Catholic who is very thirsty and hungry for the Word of God, I have learned about how to become a good shepherd who is generous and compassionate,” he said.

Bishop Vitus, 52, belongs to the Pious Society of St. Francis Xavier for the Foreign Missions.

His appointment as bishop of Padang was announced on July 3 by the diocesan administrator, Father Alexander Irwan Suwandi, via a video message uploaded on the YouTube channel of Padang Diocese’s Commission for Social Communications.

He replaces Capuchin Bishop Martinus Dogma Situmorang, who died at 73 on Nov.19, 2019.