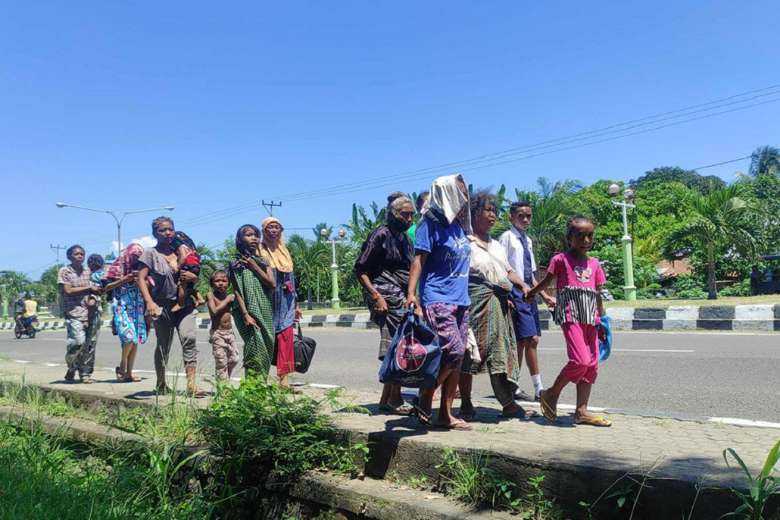 Residents of Maumere on Flores island flee to higher ground after an earthquake that had the potential to trigger a tsunami hit the region on Dec. 14. (Photo supplied)

Residents of a predominantly Catholic region in eastern Indonesia hit by an earthquake with the potential to trigger a tsunami remain on high alert following continued aftershocks.

A 7.5-magnitude earthquake with its epicenter in the Flores Sea, north of predominantly Catholic Flores island in East Nusa Tenggara province, rocked the island and surrounding areas, including southern and southeastern Sulawesi, at 10.13am on Dec. 14.

No serious damage was reported from the quake, which the Meteorology, Climatology and Geophysics Agency said was triggered by a shifting fault line.

The agency had issued an early tsunami warning with an alert status for residents of Flores, especially the north coast, which caused panic on an island that was hit by a tsunami almost 30 years ago. Videos shared on social media showed people running out to the streets.

The agency announced the end of the warning two hours later after monitoring only a non-significant rise in the sea level of 70 centimeters.

Dwikorita Karnawati, head of the agency, said at a press conference that although the tsunami early warning had ended, residents, especially in the northern area of Flores, had to remain vigilant as aftershocks continued.

If suddenly there is a strong enough shock and it lasts a little longer than 10 counts, immediately go to higher ground

She said they had recorded at least 20 aftershocks of varying strength, the highest being magnitude 6.8.

"If suddenly there is a strong enough shock and it lasts a little longer than 10 counts, immediately go to higher ground," she said.

"Although the tsunami warning sirens have not sounded, such shocks serve as a form of early warning," she added, saying they had confirmed the sirens in the vulnerable area were functioning normally.

Karnawati said residents were also asked to be careful if they were in a house or room with a cracked wall.

Father Thomas Labina, diocesan priest of Larantuka Diocese in East Flores regency, which is closest to the epicenter of the earthquake, said he was holding a meeting with teachers when the earthquake occurred.

"We panicked and ran out of the room for a while," he told UCA News. "We are carrying on with our activities as usual but remain vigilant because we also felt shaking during the aftershocks."

He said they urged residents of the surrounding community who are still panicking to remain calm but to continue monitoring the situation.

Hermelinda Nganim, a teacher in Ruteng, said she had felt a violent shaking that caused a bottle of drink on her desk to fall.

“I was participating in a training activity via Zoom when the earthquake occurred. I left the activity for a while,” she said.

The Flores region was hit by a magnitude-7.8 quake which triggered a powerful tsunami with a water height of 36 meters on Dec. 12, 1992

She said she was still monitoring official information from the government regarding the situation.

The Flores region was hit by a magnitude-7.8 quake which triggered a powerful tsunami with a water height of 36 meters on Dec. 12, 1992.

Indonesia, a vast archipelago of 280 million people, is frequently hit by earthquakes and tsunamis because of its location on the “Ring of Fire,” an arc of volcanoes and fault lines that encircle the Pacific.

The last major earthquake, which measured 6.2 on the Richter scale, occurred in January in Central Sulawesi province, killing at least 105 people and injuring nearly 6,500.