Daily fatalities hit at least 1,200 amid a skyrocketing surge in coronavirus cases in recent weeks A woman walks through the Rorotan Cemetery, a burial ground reserved for Covid-19 victims, in Indonesian capital Jakarta on July 13. (Photo: AFP)

Indonesia now has the highest number of daily deaths attributed to Covid-19, overtaking Brazil, Russia and India, the government has revealed.

Since July 19, at least 1,200 people have been dying each day in Indonesia compared with an average of 720 in Russia and India, and 597 in Brazil, according to the Indonesian Ministry of Health and Worldometers, a group providing coronavirus statistics from around the world.

The grim statistic follows news last week that Indonesia had overtaken India as Asia's Covid-19 epicenter by recording more daily infections that at one point exceeded 54,000.

Government spokesman Wiku Adisasmito said the high death rate is being driven by the highly contagious Delta variant, first detected in India, that is sweeping across the country and putting medical facilities under severe strain.

"It is spiraling because hospitals cannot cope,” Adisamito said.

The government has responded by extending emergency lockdowns in hardest-hit areas to July 25.

Dr. Felix Gunawan, director of the Indonesian Association of Voluntary Health Services, a Catholic group, said lockdowns are necessary to slow the pandemic's spread and ease pressure on hospitals.

He said people are dying in their homes because hospitals are full.

Gunawan called on the government to quickly ramp up vaccination efforts and establish more field hospitals around the country to give people a better chance of surviving infection. 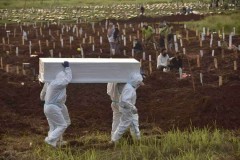