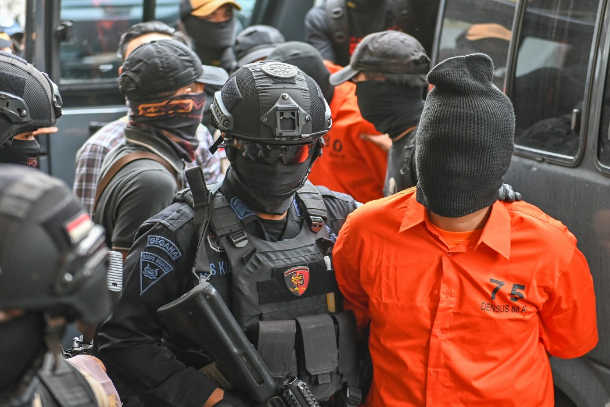 Indonesian police escort arrested terror suspects to a news conference in Jakarta in May. The government is being warned that 200 Indonesian dependents of Islamic State fighters wanting to return from Syria could pose a terrorist threat. (Photo: AFP)

More than 200 dependents of Islamic State fighters have expressed an eagerness to return to Indonesia following the defeat of the terror group and the death of its leader, according to the government.

However, a leading intelligence analyst and terrorism expert said specific measures must be implemented to deradicalize them before allowing them to reintegrate with society as they remain extremely dangerous.

Allowing the wives and children of Indonesians who fought for Islamic State group in Syria to return home could awaken local sleeper cells, analysts have warned.

Indonesia’s National Counterterrorism Agency (BNPT) says there are at least 113 women and 100 children from Indonesia in Syria wanting to return home.

Some expressed a desire to leave after victory over the terror group was declared in Syria in March, while more said they wanted to leave after the group’s leader Abu Bakr al-Baghdadi was killed by US special forces in Syria on Oct. 26.

“[They] want to leave Syria but their repatriation awaits a government decision,” BNPT spokesman Andhika Chrisnayudhanto said on Nov. 20.

He said the women went with their husbands to join Islamic State in Syria but after their husbands were killed they married other fighters and had children.

“The Indonesian government has not decided yet,” said Chrisnayudhanto. “We are worried they could trigger terror attacks in Indonesia.”

Indonesian President Joko Widodo said the government would allow their return only if they pledged to adhere to the secular national ideology known as Pancasila.

Stanislaus Riyanta, an intelligence analyst from the University of Indonesia, said all the would-be returnees are living in a refugee camp in Syria.

If they return, they would have to be detained and go through a strict deradicalization process before being released back into society.

He pointed to previous returnees, saying some had joined Jamaah Ansharut Daulah, an Indonesian terror group affiliated with Islamic State that has launched attacks in various parts of the country.

The government may want to welcome them but they have to be processed legally and totally rehabilitated before they can live among ordinary people, he said.

This would involve being kept in police camps and having to undergo special programs led by psychologists, clerics and educators, Riyanta said.

“If they aren’t rehabilitated, they can awaken old or establish new terror cells,” he added.