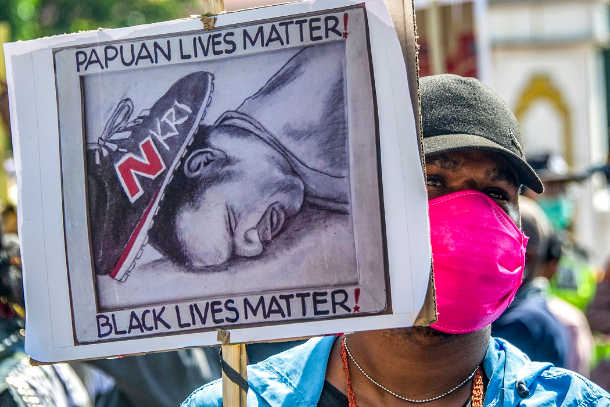 Papuan students take part in a rally in Surabaya, East Java, on June 16 to demand the release of seven Papuan protesters charged with treason for their involvement in 2019 anti-racism protests. The seven were convicted and jailed on June 17. (Photo: Juni Kriswanto/AFP)

A court in Indonesia’s East Kalimantan province has jailed seven Papuan activists for treason, ignoring mounting calls for their release by rights groups who said they were being punished for voicing opposition to racism.

The seven were jailed for between 10 and 11 months by the Balikpapan District Court on June 17.

However, the sentences were much lighter than demanded by prosecutors who sought between five and 17 years in prison.

The activists were arrested in Jayapura, the capital of Papua province, in September last year and accused of orchestrating demonstrations and violent unrest in several cities in the province.

The protests were sparked by an incident in Surabaya, East Java province, last August when a group of Papuan students were reportedly called monkeys, dogs and pigs while being arrested for defacing an Indonesian flag.

Following their arrest, police moved the seven activists to Balikpapan, a city in East Kalimantan province far from Papua, prompting fears authorities were planning to make an example of them.

“I feel relief at the light sentences but also disappointed because I believe they are innocent and should be freed,” Fathul Huda, a member of their legal team, told UCA News.

He said the activists had yet to decide whether they will appeal.

“These Papuan activists and students should not stay even a single night behind bars. They were protesting against racism but are convicted of treason. The offense here is not the Papuans' actions but Jakarta’s willingness to prosecute peaceful dissent and tarnish Indonesia’s international reputation,” he told UCA News.

Shortly before the verdict, university students staged a mass protest in Abepura in Papua province to demand the release of the activists.

The rally was held under tight security with more than 800 policemen and military personnel deployed to prevent any violence.

A rights group calling itself the Coalition of Civil Society for the Protection of Human Rights Defenders called the case against the activists another stain on Indonesia’s human rights record.

“These Papuan political prisoners have experienced racial bias, which taints the legal system in Indonesia both in the eyes of Indonesian society and the international community,” the group said in a statement issued before the ruling on June 16. “They are human rights defenders who protested against racism against the Papuan people.”

Rallies also demanding the release of the Papuan activists took place in Jakarta and other cities around the country including Jayapura in Papua province, Bogor in West Java province and Yogyakarta and Malang in East Java province.