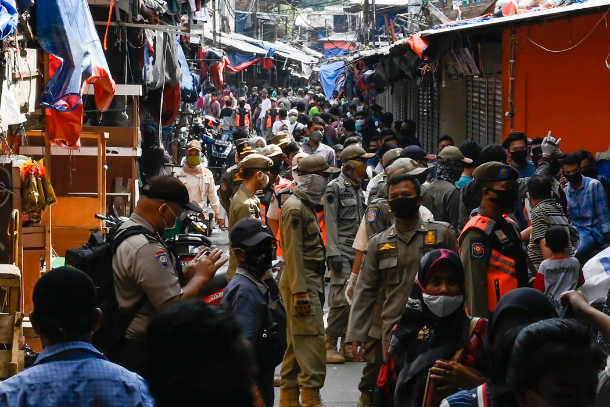 Indonesian police patrol a market as they conduct an operation against clothes vendors defying a partial lockdown against the Covid-19 pandemic in Jakarta. (Photo: Bay Ismoyo/AFP)

Indonesia’s efforts in dealing with the Covid-19 pandemic face challenges as the government of the Muslim-majority nation relaxes social distancing rules gradually despite a surge in the number of new cases and deaths.

State-owned enterprise employees and civil servants aged under 45 this week returned to work at their offices despite health concerns. Many fear being infected and transmitting the disease to people they love at home.

Three months after the first cases were revealed in early March, Indonesia remains the worst-affected nation in Southeast Asia with the highest number of deaths, which is coupled with a lack of health facilities to perform mass testing, an important indicator to determine contagion among its citizens.

Since the beginning, the government has not imposed strict lockdowns but adopted so-called large-scale social restrictions. Churches, mosques, schools and shopping malls were closed, while more vital sectors, including public transport, food, logistics and health, have been kept running under Covid-19 protocols.

Individual outdoor activities were not subjected to tough sanctions and were frequently abused by people who took to the streets and gathered in groups for no real reason, which could explain the soaring number of infections.

Despite all this, President Joko Widodo ordered the country to prepare for the “new normal” with the hope of resuming all activities while observing Covid-19 protocols some time in July.

With this in mind, authorities plan to reopen at least 70 shopping centers in Jakarta on June 5, the day after large-scale social restrictions are due to end.

During a visit to a commercial center in Bekasi, West Java, on May 26, Widodo said that he wanted the entire country to remain productive but at the same time well guarded against Covid-19.

Indonesians have reason to be anxious. The reopening of commercial centers is considered premature and reckless as the Covid-19 curve is not showing signs of flattening soon.

The head of the government’s Covid-19 task force, Wiku Adisasmito, has warned about a second wave of Covid-19 in Jakarta. The number of new cases over the last few days in the capital may have declined but it does not mean the city is free of the virus.

There is a high risk of a second wave from reopening offices and commercial centers too soon.

Policy flip-flops in dealing with the virus have not helped matters. In early May, despite a spike in infections and deaths, the government relaxed travel restrictions, particularly to and from Jakarta.

It was controversial considering that Jakarta is the virus epicenter and came exactly when other regions had just started imposing social restrictions. Soon enough, Indonesia’s largest airport was inundated by people wanting to get out of Jakarta.

A lack of coordination between central and local governments led to miscommunication. Each region came up with its own measures to protect their areas. In some instances, this caused conflicts because people wanted to protect their districts or villages from potential disease carriers.

Inconsistency has also featured in how the US$27 billion Covid-19 stimuli were allocated. More than half of the aid was allocated for economic recovery programs rather than for health responses.

Much went to support state-owned firms that provide crucial services such as electricity and oil companies.

Some reports suggested that funds were also used to support the country’s ailing flag carrier and main steel producer, indicating that personal and political interests overshadowed efforts against the pandemic.

Widodo still has plenty of time to fix the situation and focus more on health measures, such as increasing mass tests, to better assess when the disease will flatten.

Suharso Monoarfa, head of the National Development Planning Agency, has admitted that Indonesia can currently carry out tests on 743 people per one million of the population, lagging behind other Asian countries such as Malaysia, the Philippines, Vietnam, Thailand and India.

The government needs to be able to conduct more testing — at least 500,000 — as it is an important indicator to determine when the "new normal" era can start.

Everyone certainly expects to return to some kind of normalcy. However, sending people back to work or school while the virus is still prevalent equates to putting people in the middle of a minefield.

Since large-scale social restrictions began, violators have not faced tough penalties. The authorities have relied too much on a public sense of duty which, according to some studies, has resulted in only about 60 percent of the people following restrictions properly.

For the “new normal” era to function as planned, the government must not rely on people’s ability to do the right thing.

Widodo’s plan to deploy thousands of soldiers and police to monitor and, if necessary, punish people should be welcomed. But even if the entire military and police force is involved in monitoring the new normal, they will still be overwhelmed.

The situation in Indonesia remains dangerous, with health experts not able to predict when the Covid-19 pandemic will peak and end. As such, it would be wise not to ease large-scale social restrictions just yet.

The government should also only think about lifting the restrictions if there is a guarantee that more than 80 percent of the population will follow health protocols, either through self-awareness or the forced application of health rules.

Lastly, the government can only succeed in leading the country out of the pandemic if it can set aside personal, institutional or political interests.