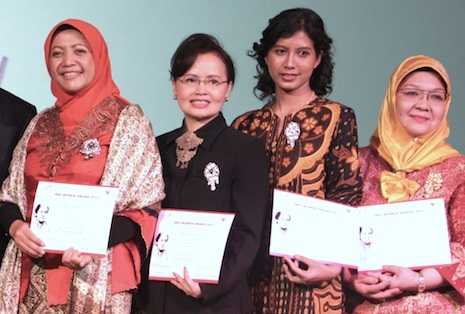 Some of the award winners

The Indonesian government has honored 21 women from across the country for their achievements and creative use of social media for their cause during an event on Monday.

Arranged in partnership with state owned PT Telekomunikasi Indonesia (PT Telkom) the event was held in Jakarta to commemorate Raden Ajeng Kartini, the first Indonesian woman who fought for the rights of women more than a century ago.

Minister of Women Empowerment and Child Protection Linda Amalia Sari Gumelar and the director of PT Telkom, Arief Yahya, presented the awards to winners working in the areas of education, environment, social activism, arts and culture, entrepreneurship and technology.

Setiastuti Betti Alisjahbana, one of the recipients, said the award shows an appreciation to Indonesian women who in many ways are still seen as second class citizens.

"This award should be a motivation for all Indonesian women to excel, not only at national but also international levels,” she told ucanews.com after the ceremony yesterday.

Setiastuti was the first woman to occupy the post of president of IBM Asia Pacific from 1999 to 2008, and is now engaged in creative industries.

“The key to success is honesty, integrity and high motivation. All women must have these,” she added.

Another award winner was Sophia Hage, a social activist who started the Selamatkan Ibu - Save the Mothers - movement in 2010 to help reduce maternal mortality as part of the Millennium Development Goals, which aim to reduce mortality to 107 for every 100,000 births by 2015.

“The maternal mortality rate in Indonesia remains the highest among Asian nations, and stands at 228 deaths per 100,000 live births,” she said in a statement.

She said Save the Mothers came from a thought that the health sector is not the only factor that can reduce mortality rates.

To achieve her goal she utilized social media such as Twitter (@SelamatkanIbu) to disseminate knowledge and information and invite people to participate in her cause. Currently she has 54,920 followers on Twitter.

In addition, she also regularly conducts educational programs, counseling, seminars or workshops aimed at educating the public about the health of pregnant women.

Another recipient, Ade Pujiati, founder of a free junior high school for poor people called SMP Gratis Ibu Pertiwi, said she founded the school because of her disappointment with public schools that burden poor students with expensive tuition fees.

She criticized the government for lying about free education, a claim frequently made in advertisements. “In reality it is not free. None of my foster children who go to public school get free tuition.”

Minister Gumelar encouraged all women to speak up about their views and aspirations, and said women should not hesitate to take the lead.

Even though she acknowledged that Indonesia’s socio-cultural climate does not fully support efforts to enhance the dignity of women, there are opportunities for women to excel in the digital age by maximizing the use of communication technology.