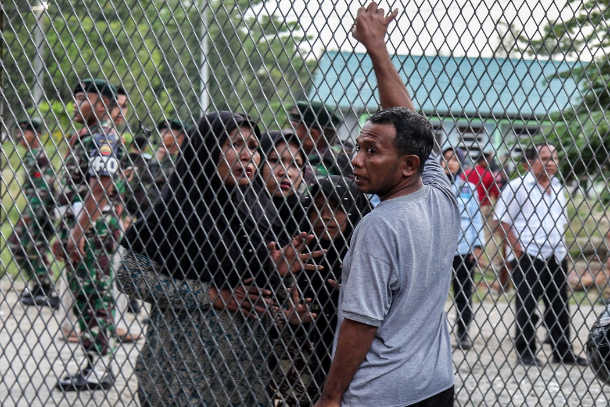 An Indonesian prisoner meets his family at a prison in Langkat, North Sumatra province, in May 2019. The Indonesian government is releasing 30,000 prisoners to try and prevent Covid-19 taking hold in overcrowded jails. (Photo: Ivan Damanik/AFP)

Indonesian authorities are freeing thousands of inmates from prisons across the country in an effort to prevent the further spread of the novel coronavirus in jails.

Dozens of rights groups have backed the government’s move to free inmates from overcrowded prisons. However, they also called on the government to free prisoners of conscience, particularly those from Papua.

The law and human rights ministry announced it had decided to free 30,000 inmates — juveniles and adults — on April 1. At least 15,000 prisoners have since been released.

"Only prisoners not linked to terrorism, narcotics, corruption, gross human rights crimes and organized transnational crimes are being released," Nugroho, director general of the correctional department, told reporters. "The risk of transmission is high because our jails are overcrowded."

He said the prisoners will be freed on conditional release, particularly inmates whose jail terms were to end between now and Dec. 31.

At least 30 rights groups, including Amnesty International Indonesia, the Franciscan Justice and Peace Commission, Asia Justice and Rights and the Southeast Asia Freedom of Expression Network, backed the move, as did Merauke Archdiocese in Papua.

“We welcome this but we also urge the government to be fair and indiscriminately apply the decision,” the groups said in a joint statement issued on April 2.

They said prisoners convicted of treason and those jailed for exercising their right to freedom of speech must be freed unconditionally. “The government must free Papuan inmates,” they added.

The groups said the risk of Covid-19 transmission in prisons was very high and the prisons themselves lacked hand sanitizers and masks. Prisoners remaining in jail must have access to healthcare and be tested for Covid-19.

“It is important that all decisions related to the handling of Covid-19 must follow international human rights regulations,” Usman Hamid, director of Amnesty International Indonesia, told UCA News.

Sacred Heart Father Ansel Amo, who heads Merauke Archdiocese's Justice and Peace Commission in Papua, also called on the Indonesian government to free Papuan prisoners, who are regarded as separatist rebels by the government.

“They have the same rights as other inmates,” Father Amo told UCA News. “If the government is committed to protecting its people from the coronavirus threat, Papuan political inmates should be freed.”