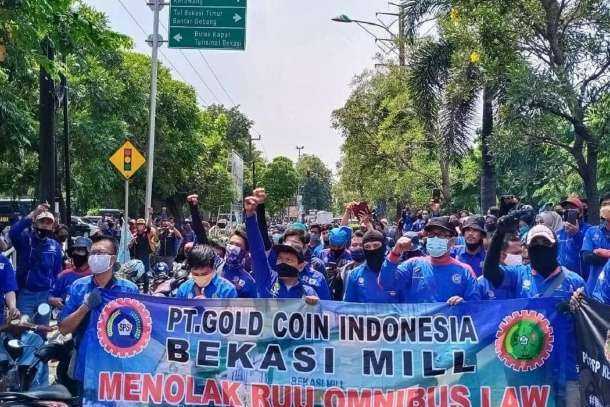 Workers in Bekasi, West Java, protest on Oct. 6 to oppose the ‘omnibus law’ on job creation. Similar rallies were also being held across Indonesia. (Photo supplied)

Opposition is growing in Indonesia as well as from international groups to the passing of a new law on job creation which they claim will harm workers’ rights to smoothen the way for investment and threaten the environment.

Parliament passed what has been called the “omnibus law” on Oct. 5 amid fierce opposition from labor and environmental various groups among others.

The legislation amends more than 70 existing laws and is aimed at making the issuing of business permits, land acquisition and foreign ownership of companies easier.

Its passing sparked widespread protests in various cities on Oct. 6, including in capital Jakarta, despite fears that it could further spread the Covid-19 coronavirus.Andi Gani Nena Wea, president of the Confederation of All Indonesian Workers Unions, which claims to have 4.6 million members, said his group would file for a judicial review in the Constitutional Court.Labor unions say the law puts workers’ rights at risk as it changes how minimum wages are set, increases the risk of arbitrary termination of employment and allows for a reduction in severance pay if they are dismissed.

Lucius Karus, a Catholic senior researcher at Parliament Watch, said lawmakers had harmed democratic principles in passing the law by ignoring public protests, especially from workers during its deliberation process.

"Criticisms were not taken on board. The move to accelerate its ratification shows that lawmakers wanted to head off workers who had already planned to hold major rallies on Oct. 6-8," he told UCA News.Karus said the law opens the door to investors, domestic and foreign, but also provides less protection for workers who are currently vulnerable due to the pandemic.

It also removes provisions that allow people to contest environmental permits and the need for companies to conduct environmental impact assessments.

Benny Kabur Harman, a Democrat Party lawmaker who opposed the legislation, said the law only benefits businessmen who work with the government.“The majority of parliament members are businessmen. So, this law serves their interests. We voted against it because its contents do not favor the interests of workers,” the Catholic lawmaker said.Usman Hamid, executive director of Amnesty International Indonesia, called the law a "disaster" for human rights. He said the provisions leave millions of workers without adequate protection.Sharan Burrow, general secretary of the International Trade Union Confederation, said “this far-reaching and complex law is an assault on UN Sustainable Development Goals (SDGs) by the Indonesian government.”"It will greatly increase poverty and lead to environmental destruction to appease multinational companies," she said in a statement.She called on the Indonesian government to repeal the law, enter into constructive discussions with trade unions on any changes to labor provisions, and keep faith with the UN SDGs that the government has endorsed.However, Indonesia’s Minister for the Economy Airlangga Hartarto said the law was needed because the country needed to increase employment and improve the post-pandemic business climate."We are currently working on dealing with Covid-19, which has had a significant impact on the global and national economy," he said.