Families of murdered, disappeared activists and dissidents call for justice ahead of next week's vote 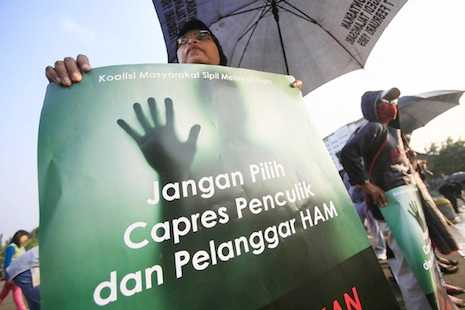 Human rights activists rally on Thursday in Jakarta, urging voters not to vote for a candidate who has been involved in human rights abuses (Photo: Jakarta Post/Wendra Ajistyatama)

The audience applauded after a young girl finished reading her poem to the accompaniment of a young male guitarist on Wednesday night.

The girl, Diva Suukyi Larasati, was the daughter of murdered human rights activist Munir Said Thalib, and the male guitarist, Fajar Merah, was the son of dissident poet Wiji Thukul, who went missing in 1998.

“I don’t remember anything about my father. But I want to know about him,” said the girl, who will start junior high school this month.

The next night, a group of intellectuals and activists held a discussion on human rights issues in an effort to push the government to resolve past human rights cases, including Munir’s death in 2004 and Wiji’s disappearance amid the 1998 riots.

Philosopher and lecturer at the Driyakara School of Philosophy, Karlina Supelli, said the government should resolve the cases and bring the perpetrators to trial, instead of just using the cases as political fodder for this year’s presidential election.

“The discussion related to past human rights violations will create suspicions of politicizing human rights. Politics often makes us miss the real goal of revealing the truth,” she said.

Suciwati, Munir’s wife, said that many people in the younger generation did not know about the nation’s past human rights violations.

“We see that many younger people do not know about the cases of human rights violations. For us as activists, this becomes a huge piece of homework,” Suciwati said.

The fierce presidential race between on-leave Jakarta governor Joko “Jokowi” Widodo and former general Prabowo Subianto, who has acknowledged his involvement in the kidnapping of several rights activists in 1998, has brought human rights violations that occurred amid the tumultuous fall of Suharto into the spotlight.