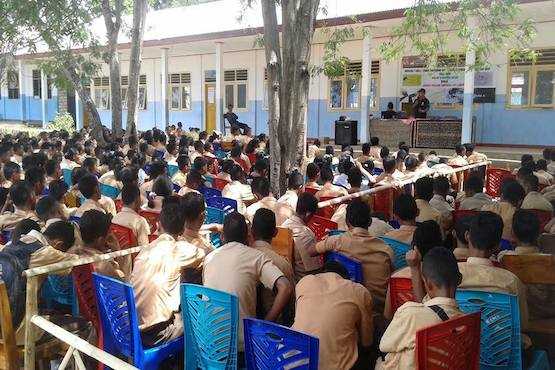 Students at Stella Maris Vocational School on Flores Island are warned about the dangers of human trafficking. (Photo by Ferdinand Ambo)

Ruteng Diocese has warned young students on the Catholic majority of Flores Island against the dangers posed by human traffickers who are increasingly targeting teenagers in the Indonesian region.

The warning came in the form of a gathering at the Stella Maris Vocational High School in Labuan Bajo on Sept. 29 and is part of an ongoing campaign by the diocese's Commission on Justice, Peace and Integrity of Creation to raise awareness among young people about the problem in East Nusa Tenggara province.

"Traffickers are targeting many children of school age, with false promises such as high salaries, so we are trying to make students aware of this," commission chairman Father Marthen Jenarut told ucanews.com.

He encouraged students to resist any temptation and report any approaches by brokers to the authorities.

Father Jenarut said one of the main aims of the traffickers is to lure young girls into prostitution.

"We are very concerned about this," he said.

"The Catholic Church, as said by Pope Francis, sees this as a humanitarian crisis."

The church fears East Nusa Tenggara is a prime recruiting ground for traffickers.

The province is largely a Christian area with 54 percent Catholic and where about 20 percent of the 4.9 million population lives below the poverty line.

Father Kornelis Hardin, the headmaster at Stella Maris School, told ucanews.com that tackling human trafficking is the responsibility of society as a whole.

Father Hardin expressed hope that the students will pass on the warning to their family and spread awareness of the issue further. The key was not to be led into temptation, he said.

"People have to be critical and should not be quickly carried away by offers that are misleading," said Father Hardin.

Having learned of the dangers it's a wonder why people fall victim to traffickers, Karolus Agung, one of the students, at the gathering said.

"Awareness campaigns like this need to be carried out continually in villages and schools," he said.