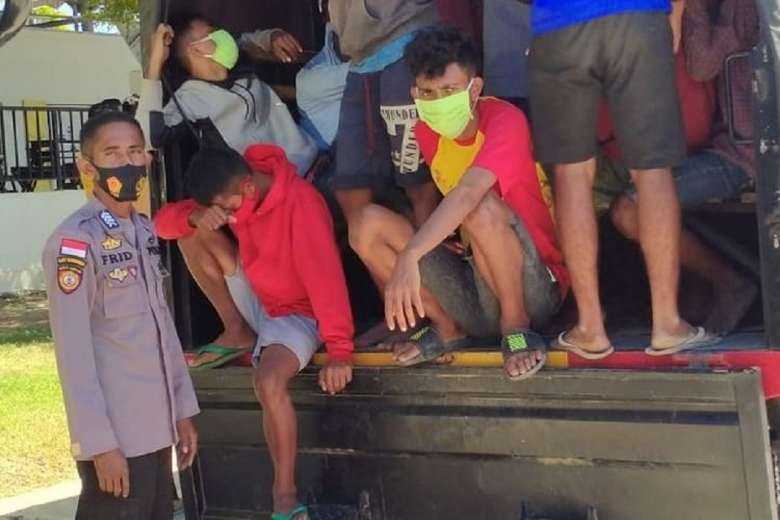 Some 113 Timor-Leste citizens who entered Indonesian territory illegally were detained by police on Aug. 9. (Photo supplied)

Indonesian authorities have deported more than 100 Timor-Leste citizens who defied Covid-19 restrictions and illegally crossed the border to participate in a martial arts event in East Nusa Tenggara province.

Rishian Krisna, spokesman for the East Nusa Tenggara police, said 113 Timorese were deported through the Motaain Cross-Border Post in Belu district on Aug. 10.

He said they were arrested on Aug. 9 as they were heading to participate in a graduation ceremony held by martial arts group Persaudaraan Setia Hati Terate (PSHT).

"They entered Indonesian territory illegally without any documents," he said.

The arrests were part of cross-border cooperation between the two countries to prevent the transmission of Covid-19 and followed a tip-off from Timor-Leste authorities.

“Every year there are always people crossing the border. They travel from all over the municipalities in Timor Leste for such ceremonies in [Indonesian-controlled] West Timor,” Timor-Leste Deputy Home Minister Antonio Armindo told Lusa news agency.

But with the pandemic, such movement must be discouraged and stopped as it risks spreading the virus

Martial arts groups, including PSHT and several others, are still thriving in Timor-Leste despite the government banning their activities in 2013 following numerous violent incidents, including killings, involving their members.

The ban saw them often head to Indonesia’s Belu district, where these groups are also growing, for special events.

Franciscan Father Yohanes Kristoforus Tara, from Laktutus on the Indonesian side of the border, said that before the pandemic members of these groups would often cross the border.

“But with the pandemic, such movement must be discouraged and stopped as it risks spreading the virus," he said.

Timor-Leste has recorded a total of 11,579 coronavirus cases, with 1,422 active cases and 28 deaths. The country has also detected 12 cases of the highly contagious Delta variant.