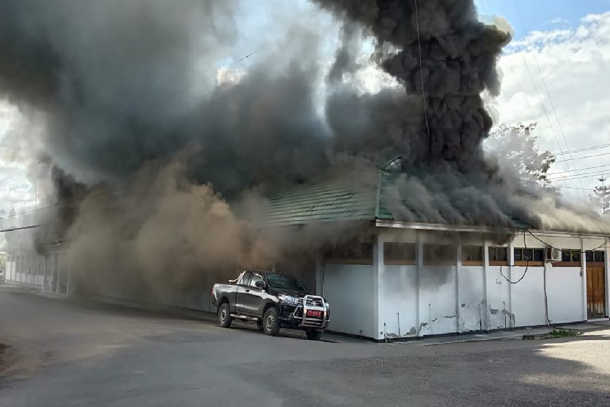 A building burns during protests in Wamena, Papua, on Sept. 23, 2019. An Indonesian court has found two men guilty of racially abusing Papuan students in Surabaya in an incident that triggered the riots in Papua. (Photo: Vina Rumbewas/AFP)

An Indonesian court has convicted two men of racially abusing a group of Papuan students in an incident that triggered deadly protests in the country’s restive Papua region last year.

The convictions on Jan. 21 followed what is claimed to be Indonesia’s first racism case tried in court.

Syamsul Arifin, a civil servant, and Andian Andriansyah, a YouTuber, were found guilty of calling the students “monkeys,” “pigs,” and “dogs” during a confrontation on Aug 16, 2019, in Indonesia’s second city of Surabaya in East Java.

Local people laid siege to a house where 43 Papuan students were staying after accusing some of them of desecrating an Indonesian flag.

Prosecutors have demanded prison sentences of eight and 12 months for Arifin and Andriansyah respectively, saying their actions sparked massive protests in several Papuan cities in September in which dozens were killed and scores of homes and public buildings were burned.

Prosecutor Muhamad Nizar said that Arifin was proven to have legally ignited racism and hate speech against Papua students.

"The defendants’ actions violated the 2008 law against racial and ethnic discrimination," said Nizar.

Andriansyah was also found guilty of uploading footage of the incident on his YouTube channel which went viral on social media. “That’s why [we] demanded 12 months in prison for him," Nizar said.

Emmanuel Gobay, director of the Legal Aid Foundation in Papua, said the light sentences demanded by the prosecutor were not long enough.

“We are very disappointed considering the impact of their crime on the Papuan people,” Gobay told UCA News on Jan. 22.

“Their actions have also led to hundreds of activists and Papuan youths being arrested, yet they are likely to get a light punishment. According to the law, they should get five years in prison.”

What the prosecutors are calling for will not serve as a deterrent to others, he said.

Andreas Harsono, Indonesian researcher for Human Rights Watch, said the proposed sentences, although lenient, were a step in the right direction in the fight against racism in Indonesia.

“This was the first racist case to be tried. The punishment may be light, but it shows progress,” Harsono told UCA News. “Usually, the perpetrators are not tried.”

Sentencing is scheduled to take place next week. Ambrosius Mulait (left) and Dano Anes Tabuni gesture while wearing pants after a court ordered them to remove their penis gourds. (Photo: AFP)

In another case, two Papuan activists on trial for treason in Jakarta complained of racism after a court ordered them to remove traditional penis gourds.

The Jan. 20 hearing was delayed when the panel refused to proceed until the men put on pants — the second time their native garb led to delays in the trial of six activists.

After several hours of negotiations, the men, who were also wearing Papuan headgear with their faces painted and the words “monkey” scrawled on their bodies, grudgingly agreed to put on trousers.

One activist, Ambrosius Mulait, said the outfit was part of his identity. “We have been the victims of racism outside the court and now we have fallen victim to racism inside the court,” he said.

The six defendants were arrested in August after participating in a demonstration at the presidential palace in Jakarta where Papua’s Morning Star flag was raised. The flag, a symbol of independence, is illegal in Indonesia.