A Catholic district head and leading candidate for governor in Indonesia's predominantly Christian East Nusa Tenggara province has been arrested on suspicion of taking bribes.

The Corruption Eradication Commission arrested Marianus Sae, head of Ngada district on Flores Island on Feb 11. He is accused of taking bribes from a contractor working on infrastructure projects in the district since 2012.

"We suspect the money was to finance his candidacy for governor," she said.

According to some polls, Sae was the frontrunner for the governor election in June.

Father Yohanes Kristoforus Tara, director of the Franciscan Commission for Justice, Peace, and Integrity of Creation, applauded the arrest.

He once filed a police complaint against Sae, accusing him of shady dealings in the issuance of mine permits.

"This means that what has been reported is true," he said. 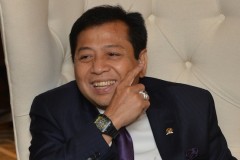 "This is an important lesson for officials not to mess with people's money."

He said that Sae's arrest was an opportunity to clean the province of corruption that has caused poverty, ignorance and held back development.

East Nusa Tenggara is the country's third worst province for graft, according to Indonesia Corruption Watch.

"There are still many officials who sit and splurge on stolen money," Father Tara said.

"This is an attempt to prevent him becoming governor as he was the candidate," favored to win the poll, said Wilvridus Watu, one of Sae's supporters.

Since his arrest, Sae's backers — the Indonesian Democratic Party of Struggle (PDI-P) — has withdrawn its political support.

John Manasye, a voter from Flores who previously supported Sae, said he would now gladly vote for another candidate.

"The commission has prevented a corrupt person from leading this poor province," he said.