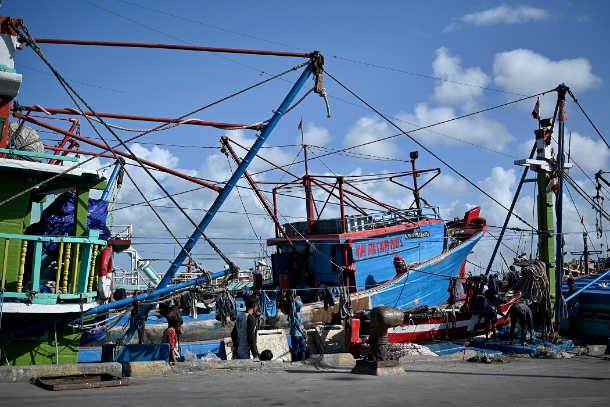 Indonesian fishermen attend to their boats. At least four Indonesian sailors have died on Chinese fishing vessels since December 2019, three of whom died on one boat. (Photo: Sonny Tumbelaka/AFP)

The Indonesian government has condemned the alleged ill-treatment of its citizens working on Chinese fishing vessels, which it claims led to the recent deaths of four sailors.

A video allegedly showing Chinese sailors dumping the body of a dead Indonesian crew member into the sea went viral on May 7, igniting accusations of inhumane treatment of sailors.

At least four sailors have died on Chinese fishing vessels since December 2019, three of whom died on one vessel, the Long Xin 629, according to Indonesian Foreign Minister Retno Marsudi.

The bodies of three of the four sailors were buried at sea, while the last Indonesian to die on the Long Xin 629 on April 26 was returned to Indonesia, along with 14 other sailors on May 8.

The surviving sailors later met Marusdi to describe their ordeal on the Chinese vessels.

Marsudi said there were dozens of Indonesian sailors working on fishing boats in slave-like working conditions in what would be a breach of international illegal, unreported and unregulated fishing regulations

“They said they were forced to work 18 hours a day and had to drink unhealthy filtrated seawater,” Marsudi told reporters after the meeting. “Some of them didn’t get a salary and those who did get paid only received US$120 for 13 months' work.”

She called on Chinese authorities to investigate the allegations.

Marsudi also demanded the International Labor Organization (ILO) investigate whether the burials at sea were legal.

ILO seafarer regulations state that a ship’s captain can hold a burial at sea under certain conditions such as if a crew member dies of an infectious disease or if the ship doesn’t have the ability to preserve a corpse.

He said the inhumane treatment of Indonesian sailors on Chinese vessels was beyond comprehension and the president must ensure protection for sailors.

Father Antonius Benny Susetyo, a member of a presidential unit promoting communal tolerance, called for a thorough investigation into alleged slavery not only in the maritime sector but also in other occupations Indonesian migrant workers are employed in.