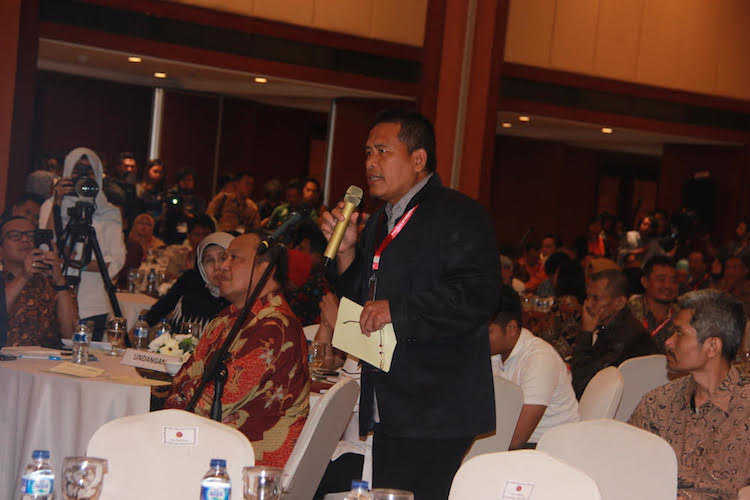 Ali Fauzi, a former terrorist, speaks during a gathering organized by the government in Jakarta in March. (Photo by Konradus Epa/ucanews.com)

Junaida (not his real name) says he became an "accidental radical" while attending a university in Jakarta because he was curious about the secret goings-on among his friends, who had joined an underground "club."

He said many of his friends espoused extremist views and he decided to join their group partly out of peer pressure, and partly because he wanted to know more about their behind-closed-doors activities.

Moreover, at least some of the authority figures at the university appeared to endorse their views, he said.

As a freshman back in 2016, he said he was surprised to find out that radical views were widely accepted on campus and those who espoused conflicting opinions were quickly condemned as "infidels."

He had gone to university expecting to be educated on the importance of respecting diversity; what he found, he said, was much more sinister.

He said the group asked him to reject key elements of Indonesia's secular ideology of Pancasila, or the Five Principles of Nationalism, Internationalism, Democracy, Social Prosperity and Belief in God.

"I was even asked to prepare for jihad. But I told them I didn't want to kill anyone," he told ucanews.com. "Then after seven months, I quit the group."

While his story may sound terrifying to a Western audience it is not uncommon in Indonesia, where many college campuses are seen as breeding grounds for radicalism despite efforts over Easter by Muslim groups to show that hard-line groups' views are neither welcome nor widely shared.

Other groups in Indonesia are going one step further and trying to build religious harmony by engaging young children in interreligious activities.

The National Counterterrorism Agency ran a survey last year and found that as many as 40 percent of students in 15 provinces in Indonesia were indicated as being of a radical mindset, which caused at least one Islamic university to outlaw face veils on campus before later rescinding the measure. A man uses his laptop at a cafe in Jakarta on Jan. 3, the same day that Indonesian President Joko Widodo officiated the inauguration of a new cyber agency which aims to fight hoaxes, hate speech and extremism online. (Photo by Bay Ismoyo/AFP)

Meanwhile, the agency said that lecturers are also not immune to the influence of extremist groups.

One of the most recent cases involving a university student being indoctrinated and resorting to shocking violence is that of Suliono from Banyuwangi in East Java.

Wielding a sword, the student went on a rampage at a church in Yogyakarta — another city in Java renowned as a centre for education some 500km from Jakarta — in February.

He reportedly charged through the entrance of St. Lidwina Bedog Church during a Sunday Mass, injuring bystanders and destroying icons of Jesus and the Virgin Mary during his 15-minute attack before he was shot by police.

Three members of the church, including the parish priest, were injured in the incident along with one responding police officer.

The episode seemed to echo another church attack in August 2016 when a man wielding a knife attacked a priest during another Sunday service at the St. Joseph Catholic church in Medan, North Sumatra.

Both attacks sparked fears of pending terrorist attacks on the respective parishes and towns.

In the case of Suliono, police said he had been attending a campus in Magelang, Central Java, where they suspect he was radicalized.

In response to these escalating stories, Technology, Research and Higher Education Minister Muhammad Nasir has pledged to sanction lecturers and students who are involved in radicalism or terrorist movements.

He urged colleges to list and report to the ministry anyone who is indicated of spreading radicalism.

"I have asked rectors to monitor lecturers and students. If they are proved to be involved, they can be expelled from their university," he said.

"Radical-minded students have no place on campuses," he added.

He said his ministry has designed a curriculum that will provide no room for such extremism to exist in colleges.

The minister encouraged lecturers to promote nationalism and tolerance when they interact with their students. A student wearing a face veil stages a protest against the ban on wearing niqabs on university grounds at the Sunan Kalijaga State Islamic University in Yogyakarta on March 8. (Photo by Koko/AFP)

From 'brainwashing' to 'social trash'

Ali Fauzi, a former terrorist who was involved in the 2002 Bali bombings that claimed 202 lives, claims he was indoctrinated by his lecturers at university.

"I became involved in a radical group because some of the lecturers kept telling me how important it was to fight against infidels, even to kill them," said Fauzi, who specialized in making bombs.

"Now I regard myself as social trash, a useless person, because everyone avoids me and labels me a terrorist," Fauzi said, adding he also used to assemble bombs that were used by terrorists in Mindanao in the southern Philippines.

However, he said that despite the extent of his crimes, he has admitted his guilt and repented. In 2016, he established a foundation to promote peace.

Fauzi said the Indonesian authorities must pay much closer attention to what is going on under their noses on campuses across the country.

Nia Kurniati, a lecturer at Bandung Islamic University in West Java, admitted she used to encounter many radical students on campus but said their numbers have declined sharply in recent times.

"Now we constantly monitor the activities of students because radical groups target them," she told ucanews.com.

The students were seen as easy prey because many lack a strong religious education and school wardens used to let them go about their business without keeping an eye on their activities, she said.

"We always teach them that Islam is a religion of love [not hate]," Kurniati said.

Zainal Abidin Bagir, a lecturer at Yogyakarta-based Gadjah Mada — one of Indonesia's leading universities — also said students at public colleges are seen as the easiest targets.

"But on our campus, such groups very much represent a minority and we do not consider them dangerous," he said.

"I hope our students think critically and strengthen their faith whenever they are faced with such radicalism," he added.

Azumardy Azra, a professor at Jakarta-based Syarif Hidayatullah State Islamic University, said social media is a useful tool that both camps can draw on to boost their numbers and undermine those of opposing views.

He said radicalized students are using social media to network outside of their campuses and called on religious leaders to exercise greater tolerance and serve as social role models.

"We urge religious leaders and Islamic scholars in Indonesia to help give Muslims a broader understanding and be more tolerant of other faiths," the respected intellectual told ucanews.com.

He said religious education should be revitalized not only at schools and colleges but also within families and promoted more strongly within society as a whole.

"Religious teaching must go beyond formalism and instil in students a strong sense of ethics and character," he said.

American Sidney Jones, an expert on security in Southeast Asia, particularly Islamic terrorist movements in Indonesia, said the country can stamp out radicalism and extremism by continuing to promote peace, democracy and tolerance.