The July 31 ruling from the South Jakarta District Court came after prosecutors indicted the group on July 24, accusing it of carrying out a number of terrorist attacks across the country.

The judges said Jamaah Ansharut Daulah was responsible for the actions of its members who have created fear and anxiety in society through a slew of attacks in various places.

The judges also ordered the group to pay a 5 million rupiah (US$347) fine.

"[We] found the organization guilty of carrying out terrorism acts. We also declare that the Jamaah Ansharut Daulah and other organizations affiliated with Islamic State be disbanded," presiding judge Aris Bawono said as he read out the ruling.

"Anshari said an appeal would not help them," Asludin told reporters.

The group was founded in 2014 by Aman Abdurrahman who was sentenced to death on June 22 for masterminding several terror attacks across Indonesia.

It was accused of carrying out a series of attacks including one in January 2016 in Jakarta that killed eight people and an attack in November 2017 against the Batak Society Christian Church of Oikumene in Samarinda, East Kalimantan that left four people dead.

The group was also accused of being behind a riot at a police detention center on the outskirts of Jakarta on May 9 which resulted in the death of five guards and a detainee, and suicide bombings at three churches in Surabaya, East Java on May 13, that killed 18. Two of the bombers in those attacks included two boys. 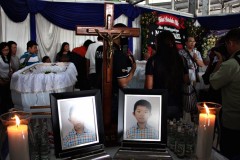 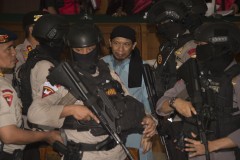 "The decision will make it easier for police to eradicate acts of terrorism," he was quoted by news outlet Kompas.com as saying.

Nahdlatul Ulema, the biggest Islamic organization in Indonesia with over 80 million members, said the court ruling must be respected.

"The court wants no more acts of terrorism in Indonesia, which is also the hope of all of us citizens," spokesman Masdar Mazudi said.

"It can minimize space for terrorists to carry out atrocities," Father Susetyo said.

"Banning the terrorist group is a way to prevent the seeds of terrorism developing further in Indonesia," he said.