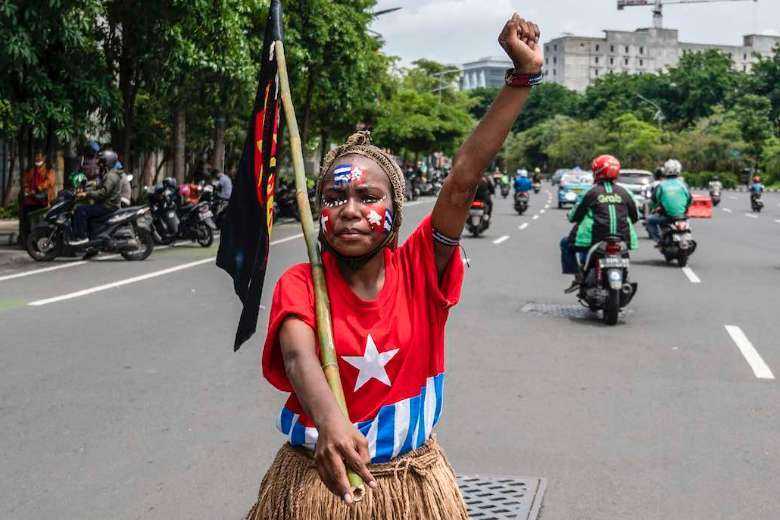 A Papuan student gestures as she takes part in a rally for the independence of Papua province, at the police headquarters in Surabaya on December 1, 2021, to coincide with the anniversary of the Free Papua Movement. (Photo by Juni KRISWANTO/AFP)

The Church in Indonesia has joined rights groups to criticize the arrests of dozens of Papuan students for marking the 60th anniversary of the birth of West Papua on Dec. 1.

The police action brought a strong reaction from the Indonesian Christian Church in Papua, Coalition of Papuan Law and Human Rights Enforcement, including the Franciscan Justice, Peace and Integrity of Creation (JPIC) and Legal Aid Institute in Papua.

“We slam the police’s repressive actions on the students and demand that they be released,” the organizations demanded.

Emmanuel Gobay, director of the Legal Aid Institute in Papua and coordinator of the coalition, said they will be organizing legal help for the students. “We still stand with them until they are set free,” he told UCA News.

Police said the students in the provincial capital of Jayapura were found waving the Papuan Morning Star flag — banned by Indonesian authorities — and also organized demonstrations waving banners and posters proclaiming “Self Determination for West Papua” and “Stop Militarism in Papua,” besides welcoming the UN high commissioner for human rights, in a show of defiance.

Despite constant harassment, the Papuan people continue the annual practice of raising the flag on Dec. 1

Papuan people peacefully mark Dec. 1 as their Independence Day from the Dutch colonial government in 1961 and also raise the flag as a symbol of their long struggle for independence.

Their dream of an independent nation was hampered by the New York Agreement on Aug. 15, 1962, according to which West Papua was handed over to Indonesia from the Dutch on May 1, 1963.

The US-supervised agreement was signed by the Netherlands and Indonesia without involving the representatives of the indigenous Papuan people.

West Papua was formally integrated into Indonesia in 1969 and the Morning Star flag was banned. Its display is punishable with a 20-year prison sentence, according to Indonesian law.

Despite constant harassment, the Papuan people continue the annual practice of raising the flag on Dec. 1.