How one Timor woman's courage stopped a mining firm 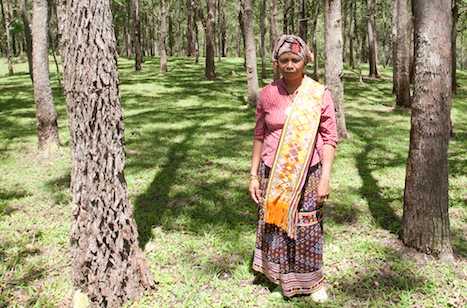 A 50-year-old indigenous woman who stopped the destruction of sacred forest land on the island of Timor was honored yesterday with the 2013 Goldman Environmental Prize in California, in the United States.

The annual prize, thought to be the most prestigious of its kind, highlights and applauds the work of grassroots environmentalists. As well as bringing worldwide recognition to the recipients and their causes, it also awards them a bursary of US$150,000 to help them further their aims.

This year’s winner Aleta Baun, known as Mama Aleta, is from the indigenous Mollo people of South Central Timor.

Born into a farming family, she lost her mother at a young age and was raised by other women and elders from the community. Respect for the environment as a source of identity and livelihood was a natural part of her education.

Like many indigenous peoples. The Mollo have a deep relationship with their natural habitat that can be described as spiritual. It sustains them with food and medicine from the forest, with crops from the fertile land and with dyes that the local women use for the highly colorful fabrics they weave.

This ancient and harmonious relationship started to come under threat in the 1980s when local government issued permits to mining companies to cut marble from the Mutis Mountain region. This is an area of rich biodiversity which some tribal people hold to be the dwelling place of the Almighty.

The permits, issued without consulting local villagers, led to rampant deforestation which in turn caused landslides, water pollution and other serious ecological problems.

This provoked Mama Aleta into action. Seeing the mining activities as a threat to the very survival of local indigenous people, she and three friends launched a non-aggressive protest campaign.

Walking for many kilometers from village to village, she spread the word and began to organize local villagers to peacefully occupy the marble mining sites and stage “weaving protests” on them.

In a remarkable role reversal, while the women protested at the mine, the menfolk provided domestic support at home, cooking, cleaning and caring for the children.

The campaign raised the wrath of various commercial interests. Several protesters were arrested and beaten; Mama Aleta herself survived an assassination attempt.

But her persistence and courage paid off. In 2007, the marble mining companies began to wind up their operations and in 2010 abandoned them completely.

Mama Aleta is now a member of AMAN, the National Council of the Indigenous People’s Alliance of the Archipelago. She represents the Bali-Nusa Tenggara region.

“Mama Aleta deserves the prize,” said Abdon Nababan, secretary-general of AMAN. “She is an indigenous woman who has become a leader and chooses to empower other women amid a social structure which is dominated by men.”

Mama Aleta is the third indigenous individual from Indonesia to win the Goldman Pize since it was first presented in 1980.