In Indonesia's Sui Utik hamlet, the Dayak Iban hope to avoid the fate of their neighbors 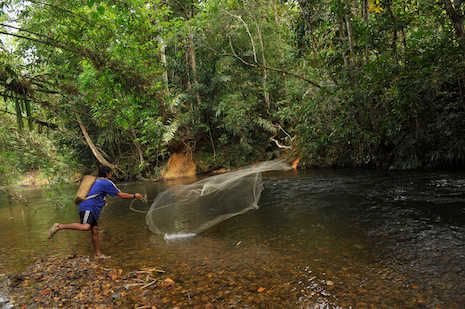 Verdianus Muling fishes in a traditional manner on a river in Sui Utik. (Photo by Barmen Simatupang)

When Lukas Alfario Surya Dewanto arrived at the remote Sui Utik hamlet deep in the forests of West Kalimantan province last year, he wasn’t sure what to expect. A student at the University of Gadjah Mada in Yogyakarta, Dewanto and his friends had little understanding of indigenous culture and life.

After two months of living with local families, however, Dewanto has come to appreciate the unique site. The hamlet, which borders the northern part of Malaysia’s Sarawak state, is a stunning place: ancient trees and the forest canopy; birds, bears, snakes, and deer roam freely alongside fresh streams.

“We came here to feel how to live in the middle of ancestral forests and to get to know the local people that have protected the forests for years,” said the 23-year-old.

“I want to go back there someday,” he added.

Whether that is possible depends on the indigenous Dayak Iban’s ability to protect their sacred land. Already, Sui Utik is the only community in Kapuas Hulu district’s Batu Lintang village that hasn’t sold their trees or turned their land into palm oil plantations.

Instead, the villagers have banked on eco-tourism, hoping that by attracting students, locals and foreigners alike, they can convince the world of the importance of protecting their land.

Over the past decade, a number of companies have come to the hamlet and surrounding areas to collect woods. With them, they brought Malaysian ringgit to lure the indigenous residents.

“We refused it. It was only the Sui Utik hamlet that rejected it. Almost all other communities living in other hamlets of the village as well as other villages accepted it,” said Raymundus Remang, 42, a community leader.

For the indigenous Dayak Iban living in Sui Utik, it has been a tradition that they only use about a third of their 9,500-hectares of ancestral forests for crop planting. They let the rest of the ancestral forests grow as they are — making it an appealing locale for loggers.

“Although we are told that we will be given money, we don’t want it,” he said.

Thanks to their strong commitment, massive trees such as gaharu or agar wood and ulin or Borneo ironwood can only be seen in Sui Utik. Neighboring hamlets and villages only have few small trees. Worse, they are covered with palm oil plantations. Unlike many of their neighbors, the villagers have held on to their traditional beliefs, including one that says destroying nature will only create a catastrophe.

“If any activity of illegal logging comes in, the existing order will vanish. We don’t want our next generation to see damaged nature because of their parents’ deeds,” said Remang.

The community also calls on every member to plant trees starting as a young child. This has become an obligation. It’s hoped that this will allow for an ample supply of wood when they grow up and need to build houses.

For young indigenous men like Verdianus Muling, 23, such an obligation is never a burden. “We will take care of our ancestral forests,” Muling said.

“If we destroy our forests, we will have to face the impact,” his friend Inam, 31, added.

To protect the forest, indigenous villagers institute a complex traditional law — violations of which entail sanctions.

The customary law regulates, among other things, the correct time for planting trees, growing rice and cutting timber.

Traditionally, before cultivating their land between September and October, the Dayak Iban hold a ritual in which they slaughter a chicken to be given to so-called guardians of the land. A similar ritual is held before cutting down trees. Before cutting down trees, a prayer is offered: “have mercy on us, we have to cut down trees as we need woods”.

Sanctions, meanwhile, depend on the gravity of the violation. If someone steals fruit from trees planted on a neighbor’s land, for example, he must give at least one sack of rice to the owner of the land. A tribal leader is the one who decides the sanction.

“We respect this customary law. We even introduce it to our children and grandchildren,” Apay Janggut, a 44-year-old tribal leader, said. Apay is a common honorific in the Iban language.

The 304 people living in Sui Utik stick to the rules closely. Each of the hamlet’s 30 families is allowed to cultivate at least three hectares of land for a three-year period. After that, they must move to another piece of land and leave the old one, a tactic that protects and preserves the ancestral forests.

The forests, in turn, provide all that the community needs. They hunt for animals, go fishing, and search for herbal medicine.

“Our forests have everything that we want,” Apay Salim, another tribal leader, said. All villagers live in a 28-room, 216-meter, 50-year-old longhouse called Rumah Betang, which is also where meetings take place and the community discusses its issues at the end of each day. (Photo by Barmen Simatupang)

Forest comprises 60 percent of Indonesia’s land area, which makes it the third largest area of tropical rainforest in the world. However, deforestation is an ongoing threat. Recent reports have found that Indonesia may have the highest rate of forest loss in the world. Between 2000 and 2012 more than 6 million hectares of forest was lost, according to a University of Maryland study published last year and headed by a former Indonesian forestry official.

When in comes to deforestation, indigenous people comprising more than 500 communities in Indonesia play a significant role in protection and prevention.

And what the Sui Utik hamlet community has done has won praise from Zenzi Suhadi, a forest campaigner with the Indonesian Forum for the Environment (Walhi).

“Sui Utik shows that indigenous people make an effort to protect their ancestral forests for generations,” he said.

According to Suhadi, 58 million out of 130 million hectares of forest in the country — Sumatra, Kalimantan, Sulawesi, Maluku and Papua islands — have been turned into palm oil plantations or gold and manganese mines.

“I don’t know the exact number of permits for the plantations and mining. But it’s more than 10,000,” he added.

In having avoided such fates, the hamlet serves as a correction tool for the local government.

“People living in Sui Utik show that indigenous people have a local wisdom, which can help them survive if it is preserved well,” said Agapitus from the Indigenous Peoples’ Alliance of the Archipelago (AMAN), an umbrella of indigenous communities in the country. The indigenous people’s effort in protecting their ancestral forests in Sui Utik has driven GreenIndonesia and AMAN to jointly develop an ecotourism initiative.

Besides the hamlet, the initiative involving six communities of indigenous people from across the country is also developed in other areas with indigenous communities such as Bali, East Nusa Tenggara, Jambi and Maluku.

Through the program, women weavers from all over Indonesia connect, share knowledge, and keep their traditions alive. The communities work with many local plants to create unique colors and pay close attention to maintaining the environment where the vegetation grows.

According to Yopie Basyarah, program manager at GreenIndonesia, the initiative aims to re-enliven the culture of the indigenous people.

In January, GreenIndonesia joined a tourism program held in Oslo, Norway, to introduce the initiative.

“We wanted to introduce Sui Utik hamlet to the world. What impressed us during the program was that so many people said that they wanted to visit Sui Utik,” he added.

Dozens of Norwegians have promised to visit the hamlet in June.

Support for the development of ecotourism in the hamlet also comes from the local Catholic Church.

“The initiative is in line with the indigenous people’s effort in making nature their best friend,” said Father Marchadius Markus Golo of St Martin Parish in Benua Martinus.

The community sees nature as something which cannot be separated from their Catholic faith, said Father Golo. Nearly all members of the indigenous community are Catholics.

The indigenous people have such way of seeing things because they view nature as something given for free by Almighty God. “This is their faith, and with this faith they have the commitment to protecting their ancestral forests,” he added. Today, most of the Dayak Iban in Sui Utik are Catholic, only a few of them still believe solely in their traditional religion. (Photo by Barmen Simatupang)

In Kapuas Hulu district, 51.6 percent of its 3.1 million hectares of land is a conservation area. Only 20 percent is given to palm oil plantation companies.

“We don’t want to force the indigenous people like those in Sui Utik hamlet to accept palm oil plantation companies. They already have a commitment to protecting their ancestral forests,” Deputy District Head Agus Mulyana said.

But ecotourism is far from a guaranteed salvo.

“Ecotourism will bring changes when everything is measured with money. The indigenous people in Sui Utik must be able to maintain their cultural values which they have kept for so long,” he said.

Residents, however, remain hopeful that their chosen path will succeed.

“We feel happy [with ecotourism] as we can earn money from so many visitors coming here. This helps us,” Remang said.

For Remang and other members of the hamlet, turning their protected forests into an ecotourism attraction may well be the best way to improve their lives.

“People come to Sui Utik, and it makes us believe that what we have chosen so far isn’t wrong,” Remang said.