The country’s constitution does not fully recognize indigenous peoples, denying them economic and political rights 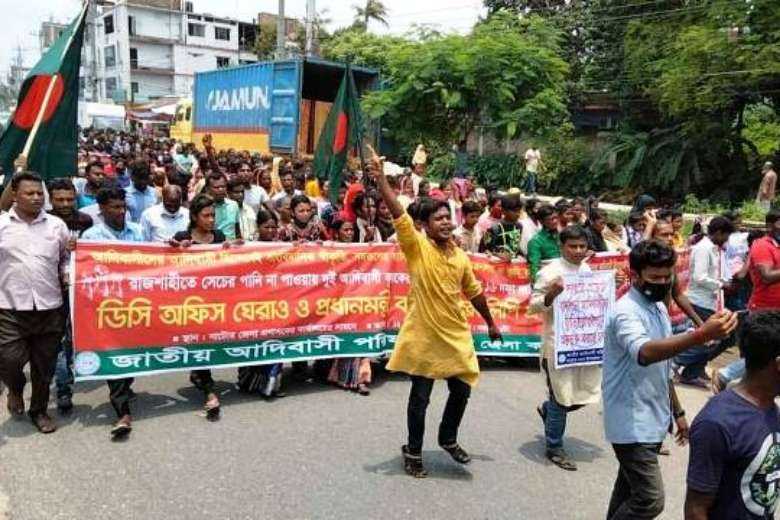 Bangladeshi indigenous peoples march on the streets to highlight their political and economic rights in Natore district on May 18. (Photo supplied)

Indigenous peoples including Catholics in Bangladesh held rallies across the country to demand constitutional recognition of their minority status and promotion of human rights and rights for land, and education in their mother tongues among others.

The rallies were held in 13 districts on May 18 and a memorandum of 16 demands addressed to the prime minister was handed over to the local authorities. The Bangladesh Adivasi Parishad, a national network of indigenous people, organized rallies, claiming the participation of 38 indigenous communities.

Bangladesh is home to more than 54 indigenous tribes who speak at least 35 languages along with the majority Bengali-speaking population, according to the global human rights organization, International Work Group for Indigenous Affairs (IWGIA).

“The government of Bangladesh does not recognize Indigenous Peoples as indigenous," IWGIA said. However, the 2011 amendment of the Constitution mentioned some cultural aspects but issues related to the economic and political rights of the indigenous people, "particularly their rights to land, continue to be ignored,” it said.

On the other hand, indigenous activists identified the lack of competent and qualified teachers in their native languages and the lack of educational institutions in their areas as the main reason for their social and economic deprivation.

“We have conveyed to the prime minister our 16 demands, which include compensation and justice for indigenous people who committed suicide in March and those killed during the evictions in Gaibandha district in 2016,” Rabindranath Soren, president of the Parishad told UCA News.

Two Santal tribal farmers--Abhinath Marandi and his cousin Rabi Marandi of Nimghutu village in Godagari sub-district--were allegedly poisoned on March 23 this year. Police arrested one Sakhawat Hossian and charged him with abetting the suicide.

A majority of the indigenous population lives in the flatland districts of the north and southeast while the rest reside in the Chittagong hill tracts, where they are known as Jummas for their crop rotation agriculture, known locally as Jum.

Sujan Biswas, a Catholic belonging to the indigenous Malpaharia tribe from the Pabna district said they barely received any government assistance as a major portion meant for them was taken away by local influential people.

“We want to live with dignity. We want the government to grant us constitutional recognition and rights as equal citizens. We want to live together with everyone in the country,” Biswas told UCA News.

“The minority indigenous people are an oppressed and a deprived lot,” said Father Liton Hubert Gomes, secretary of the Justice and Peace Commission of the Bangladesh Catholic Bishops’ Conference.

“On behalf of the Church, we demand the government to grant them rights as equal citizens,” he said.