Some 3,000 people who fled violence remain in makeshift camps 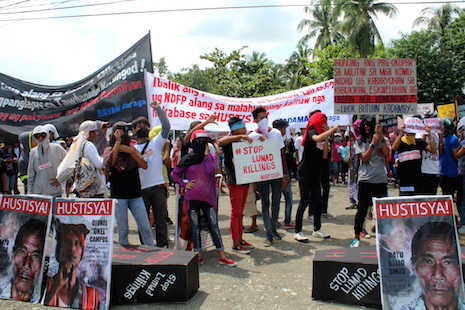 Protesters in Butuan City on Oct. 10 call for an end to attacks on tribal communities in Mindanao. (Photo by Ben Serrano)

The archbishop of Tandag in the southern Philippines, where thousands of tribal people fled their homes due to the presence of paramilitary groups in their villages, said indigenous people in Mindanao have become victims of a protracted war.

"The [tribal people] should not be made to choose ... between the government and the rebels," said Archbishop Nereo Odchimar. "They are victims in this protracted war."

Some 3,000 indigenous peoples belonging to the Manobo tribe of Surigao del Sur province continue to live in makeshift shelters in Tandag City after paramilitary gunmen attacked their villages on Sept. 1.

The exodus of the Manobos began when members of the paramilitary group Magahat-Bagani Force allegedly killed Emerito Samarca, head of a tribal school in the village of Diatagon in Lianga town.

On the same day, gunmen shot and killed tribal leaders Dionel Campos and Aurelio Sinzo in front of the villagers.

Archbishop Odchimar said that the tribal people have been accused of being "sympathizers" of the communist New People's Army rebels because they have relatives among the guerrilla group.

"It should be the other way around because they have also friends and relatives in the military," the archbishop said.

"The people have no choice but to entertain the rebels and the military or they might be branded as belonging to one party," said Archbishop Odchimar, adding that the tribal people are "victims of circumstance."

He said the allegations made by the military that the Tribal Filipino Program of Surigao del Sur, an apostolate of the Archdiocese of Tandag since the 1970s, as a front for the rebels is "unfair."

The program is an alternative school registered with the Department of Education, he said.

The military, however, accused the institution of being a recruitment facility for the rebels.

Archbishop Odchimar denied the allegation, saying that the tribal people are the "real victims" in the conflict, and the government should address the concerns of the people. 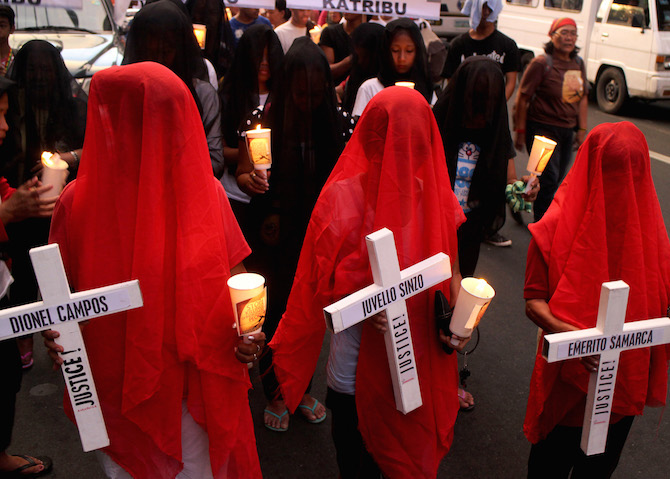 Activists wear red veils at an Oct. 10 protest in Manila to call for justice for victims of human rights violations in Mindanao. (Photo supplied by Katribu)

On Oct. 10, some 4,000 tribal people, peasants, workers, human rights activists, priests and nuns held a protest rally in Butuan City to mark the 40th day since the killings in Surigao del Sur province.

The protesters urged authorities to immediately arrest the suspects in the killings.

A joint statement issued by the protesters said the killings were "planned and systematic to instill fear, silence, and drive out communities and schools" to facilitate the entry of mining companies.

In Manila, human rights activists and religious groups held a march to express their "rage against the injustice and continuing human rights violations" against the tribal people of Mindanao.

"The indigenous communities can still literally feel the chill and taste how bitter the culture of impunity is," said Piya Macliing Malayao, secretary general of the indigenous people's advocacy group, Katribu.