A indigenous group from Chhattisgarh perform a folk dance for the opening of India's first indigenous carnival in New Delhi on Oct. 25, 2016. (Photo by Bijay Kumar Minj/ucanews.com)

India's Chhattisgarh state has withdrawn a controversial land law following stiff opposition from indigenous groups including Christians in the central state, where elections are due at the end of this year.

The state government of the pro-Hindu Bharatiya Janata Party withdrew the Revenue Code (Amendment) Bill 2017 on Jan. 11, less than a month after it was passed by the legislature.

Indigenous groups called it a "dark law" to usurp their land.

The bill amended a clause in the existing law to empower the government to buy land directly from indigenous people in restricted areas, bypassing the acquisition procedure of getting a consensus from village councils.

The government claimed the bill aimed to speed up development projects such as roads and other projects in the state. The stipulated process of buying land from indigenous people delayed the process.

Indigenous leaders, including Bishop Paul Toppo of Raigarh, believe the amendment aimed to help the government take over tribal land in the name of development and pass it on to industrial and infrastructure development companies.

The prelate welcomed the government's decision to retreat. "We all should accept it as our victory because tribals without land are like fish out of water," the Oraon minority prelate said.

Bishop Toppo regretted the dehumanizing poverty of the state, which was established in 2000 purportedly for the development of indigenous people. People still struggle for their daily food in the mineral-rich state, he said.

Indigenous form some seven million of the 23 million people in the state, which produces 15 percent of India's steel. But 50 percent of people live below the poverty line, meaning they have no resources to have a full meal a day.

The state is considered a major hub of industries for processing minerals, metals and coal, but they are owned by outsiders who hardly employ aboriginals. The few locals employed work as unskilled laborers. 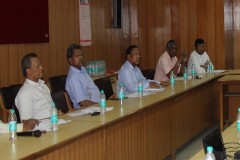 Father Vincent Ekka, who researched indigenous issues at New Delhi's Jawaharlal Nehru University, told ucanews.com that the government's retreat on the issue in this election year is "just an eyewash to please" indigenous people who are politically decisive.