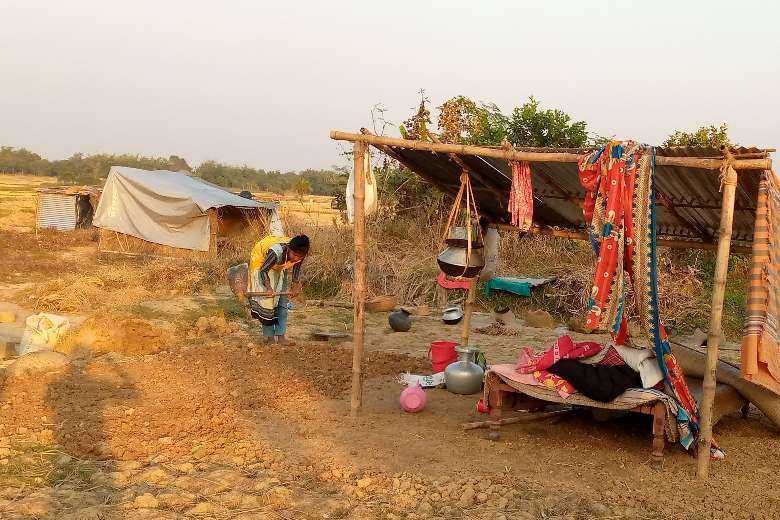 An indigenous girl tends to fields near her makeshift house in Bangladesh. Some 23 indigenous families have been living in fear of eviction in Rajshahi district since Dec. 3. (Photo supplied)

Landless indigenous Christians have sought support and justice from the government following an attempted eviction and death threats allegedly from Muslims in northern Bangladesh.

A group of 30 Muslims with an influential leader attempted to evict some 23 indigenous families by force, wanted to plant trees on the disputed land and threatened to kill them on Dec. 3, claimed Simon Marandi, 28, an ethnic Santal youth.

The incident took place in Badhair village in the Tanore area of Rajshahi district.

The Muslims were armed with bamboo sticks and sharp weapons and warned villagers that their houses would be burned down if they didn't move out willingly, he said.

Durul Huda, the Muslim leader, and his brothers have allegedly been trying to occupy 12,500 square meters of khas (government-owned fallow land) land where the families have lived for months.

A video of the incident on Facebook showed Muslims and villagers embroiled in a heated altercation as the villagers resisted the eviction.

They threatened to kill us and burn our houses. We appeal to the government to save us from eviction

Simon Marandi, a Seventh-Day Adventist Christian, said 65 members of ethnic families have been living in extreme fear since the attack. A youth group has been guarding the village to resist a possible arson attack.

“Since we have no place to live, we have been living here for months building houses because it is khas land and we are landless people. But local influential Muslims are threatening us in various ways to evict us from here. They threatened to kill us and burn our houses. We appeal to the government to save us from eviction,” Marandi told UCA News.

Villagers told UCA News that the ethnic people have been living on the government land for months but don’t have any written permission or land document. Earlier they lived in other areas in Rajshahi but moved to the village more than two months ago as the number of their family members increased.

Durul Huda claimed the property as his own and denied allegations of an attack and death threats.

“When I went to plant trees on my land, they started arguing with us, but I did not threaten them in any way. I am the owner of this land in the ancestral lineage. They are forcibly living here,” Huda told UCA News.

Police arrived in the village shortly after the incident and no lawsuit has been filed, said Rakibul Hasan, officer in charge of Tanore police station.

"We went to the spot as soon as we heard about the incident. Now the situation is normal. Since no case has been filed, we are keeping an eye on the village,” he told UCA News.

However, he didn’t confirm the status of the disputed land and whether it is khas land or private poverty as claimed by Huda.

Church officials from Rajshahi Diocese said they were not aware of the incident.

Father Patrick Gomes, a senior priest and convener of the Interfaith Dialogue Commission, said that if the incident is true, this is a case of injustice to indigenous people.

In 2016, in the worst violence in years, three Christian Santal men were killed and dozens were injured in a deadly clash with local thugs and police in Govindaganj of Gaibandha district over disputed land.

An estimated 3 million people belong to ethnic minority groups in the Muslim-majority country of more than 160 million.

For years, indigenous communities have called on the government for a separate ministry to ensure their rights and a land commission to end frequent land disputes.