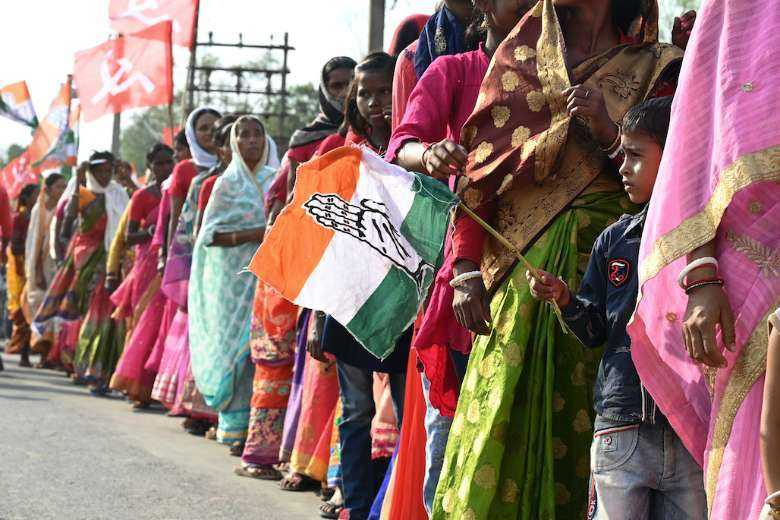 Activists of the Congress and the Left parties participate in the last campaign rally for the United Front candidate before the first phase of West Bengal's state legislative assembly election in Purulia, some 325 km west of Kolkata on March 25, 2021. (Dibyangshu Sarkar/AFP)

If the pro-Hindu party wrests West Bengal from the stronghold of a local woman leader, it would leave Prime Minister Narendra Modi with no opposition worth its name in the country.

West Bengal has been touted as the cultural capital of India, the engine room that powered the political aspirations of Indian people during the struggle to free India from the British colonial yoke.

Kolkata (formerly Calcutta), the state capital, has been abuzz with cultural activities since the British Raj and the colonialists used the city as its capital before shifting it to New Delhi in 1911.

By planning to paint the 91 million-strong provincial state saffron, the BJP is trying to gain a cultural and intellectual standing for its Vedic doctrines and the Hindutva, the predominant form of Hindu nationalism.

The majoritarian party is dreaming big as West Bengal acts as the gateway to six northeastern states, which share borders with an authoritarian China to the friendly Kingdom of Bhutan.

Some of these provincial states, especially Nagaland and Mizoram, are known for their large ethnic Christian population.

The BJP’s tough political war with Banerjee, who is credited for ending the 35-year long rule of the Communist Party in the state, makes it impossible for anyone to predict who will emerge as the winner, when the results are declared on May 2.

Banerjee has completed two full terms as chief minister of the crucial state and hopes people will reject the “outsiders.”

No wonder one of the widely used slogans of TMC this time is: “Bengal wants her own daughter!” The TMC also says that BJP lacks local leadership to take on a mighty Banerjee.

However, of late, the BJP has gained much ground in West Bengal politics, especially by orchestrating splits in the ruling party and in other opposition camps.

In the last six months alone, when the polls were round the corner, 34 legislators from the TMC, six from earlier defected from the Communist Party Marxist, four from the Congress and two other region party members, switched their loyalties to the BJP.

The TMC claimed that they were scam-tainted and went to the saffron camp to evade the legal process and skip the investigation by federal police agencies. The BJP, led by Prime Minister Modi, heads the federal government since 2014.

Despite losing some of her close associates to the BJP, Banerjee is unfazed and predicts a landslide majority for her party.

Banerjee, who hit the last nail in the CPM’s coffin a decade ago, is accepted as the “daughter of Bengal” by her mostly Hindu supporters. She is also seen as a champion of the rights of Muslims, who make up for 27 per cent of the state population.

She is also seen as supporters of workers and women. Her initiative for female education – Kanyasree – had won kudos from the United Nation.

The BJP is putting up a tight fight under the leadership, but it is not going to be a cakewalk they struggle to reach out to the rural belt, where the rallies addressed by the Modi-Shah duo were poorly attended.

A group of non-partisan citizens had launched a state-wide campaign with the slogan, ‘No Vote for BJP’ and it is gaining momentum.

The TMC is riding high on its track record in the 2016 state election when it won a whopping 211 of the 294 seats, while BJP was reduced to three seats.

However, the BJP made amends in the elections to the national parliament in 2019 and won 18 seats of 44 parliamentary seats of the state.

The BJP is using all its resources to outsmart Banerjee and to capture one of the last bastions of democratic India so that its sole leader Modi will have no opposition in the country of 1.39 billion people.