Spirituality often takes a backseat in the battle to survive Domestic workers protest in New Delhi on July 2, 2016 against abuse they face in the workplace. (ucanews.com photo)

Anima Kujur says even her worst enemies should not have to undergo what she suffered while working as a domestic helper in the Indian capital of New Delhi.

After arriving to the city five years ago from the eastern state of Jharkhand, the tribal girl got work through a placement agency to get a job as a domestic helper. Harassment started from the very first day of she was employed. Her employer, poured water into her food, which was leftovers, saying, "If you eat more, you will become fat and lazy."

Kujur said she was also a victim of sexual abuse as other workers in the house such as the chauffeur, gardener, as well as men in the employer's family sought to have sex with her, often forcefully.

She is an example out of millions, the majority of them in Indian cities of New Delhi and Mumbai, toiling to build a place for themselves and their families after they moved out of their homelands in central and eastern India.

Less developed states such as Bihar, Chhattisgarh, Jharkhand, Odisha, Rajasthan and Uttar Pradesh are the main sources of migrants who are mostly employed in construction, domestic work, textile, brick kilns, transportation and agriculture. A migrant worker from Bihar on a construction site in East Delhi on May 18. (ucanews.com photo) 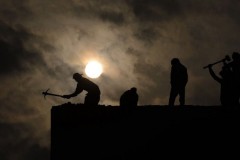 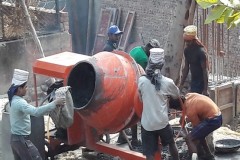 A third of India's 1.2 billion people are estimated to be internal migrants, moving from their place of birth for education and work, according to the government's 2001 census.

Although India houses more than half of the world's 740 million migrants, the government gives them little in the way of attention in its policy making.

For example, the government has no record of people like Kujur who work as domestic helpers in India. Nor does it have policies to ensure their social security, minimum wage, leave or freedom of religion, said Maxima Ekka, co-ordinator of the Domestic Workers' Forum of Delhi Archdiocese.

Most tribal people from the poorer states come to New Delhi and Mumbai because they are more comfortable speaking Hindi whereas, in southern Indian cities or eastern Kolkata, Hindi is not the lingua franca, said Mukti Prakash Tirkey, editor of a tribal weekly published in New Delhi.

Most of them take up low-paying jobs as they are unskilled, said Tirkey.

"Culture, food habits and social security, everything is strange to them. They struggle every day and every hour. Faith and comforts take a back seat," said Tirkey. Domestic workers call for better treatment at a protest in New Delhi on July 2, 2016. (ucanews.com photo)

A lone battle for life

Most tribal migrants have no way to procure documents to prove their identity. They do not have tax cards or even ration cards which are essential to get government welfare, he said.

"Most migrate as teenagers. They come without any documents and in the cities, they have no proof of address which makes it impossible to help them," Father Rosario said.

"As formal housing in Mumbai becomes unaffordable, migrants live in slums. Families may live together in a 10x10 feet room area, facing problems like high rent, lack of electricity, water and privacy," said the priest.

They face severe social discrimination too. "Domestic maids have not been allowed to accompany their employers or sit alongside them, even at places of worship," Father Rosario said.

"Being unable to communicate in English, these domestic workers cannot work for foreign employers who would pay higher wages," he said.

They are not recognized as tribal people by Maharashtra state, whose capital is Mumbai, and therefore they cannot get benefits set aside for tribal people.

"They often fight a lone battle when facing problems of bonded labor, sexual and physical harassment. Moreover, they find themselves up against powerful entities and cannot hope for justice as they lack social and financial support," he said.

He said some 90 percent of tribal housemaids have "no opportunity to get married" to Catholics as local Catholics do not want to marry them and they cannot go back to their village to find partners. "They find partners outside the faith from among security guards and drivers," Father Rosario said. A migrant worker from Bihar on a construction site in East Delhi on May 18. Church officials are worried social, cultural and political insecurities are increasing. (ucanews.com photo)

A hope for the church

The tribal department of Jesuit-run Indian Social Institute estimates that the national capital has some 900,000 tribal migrants in a population of some 16 million.

The Catholic tribal people who settled in the city have also become integrated with the local community. For example, Father Sankar said, 12 of 130 priests in the archdiocese belong to tribal communities.

Father Vincent Ekka, a scholar at Jawaharlal Nehru University said church groups have several programs in Delhi to help tribal people. "The church is also engaged in pastoral work, it is also helping tribal people find jobs in the government and private firms."

The intervention of the church will "ensure them a good future" for the next generation of tribal people in the Indian cities.