India's tribal Christians under pressure to give up faith 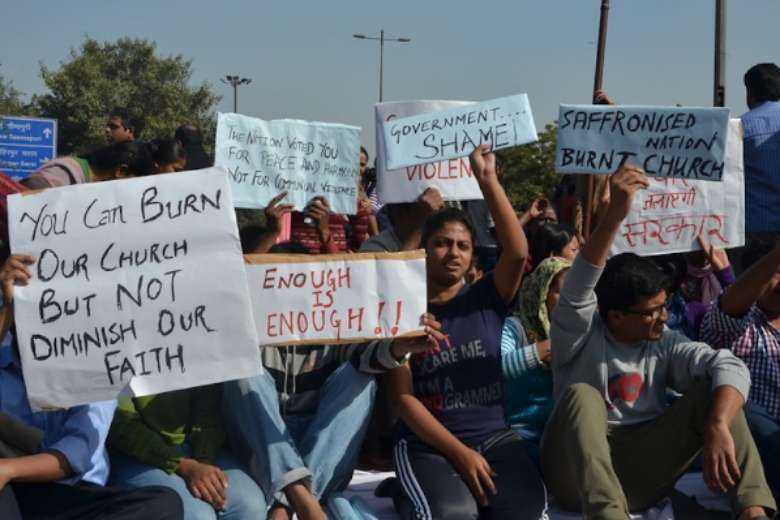 Indigenous Christians in the central Indian state of Madhya Pradesh say they are under increasing pressure to give up their faith due to mounting pressure from Hindu activists.

“Our people are being forced to give up Christianity and join the Hindu religion,” said Patrick Ganava, a Catholic from the predominantly tribal Jhabua district.

He said Hindu activists and organizations were conducting special drives in villages to pressurize Christians, which was a cause for worry.

“There is propaganda against Christians in the district but come what may we will not give up our faith in Jesus,” he told UCA News on Nov. 16.

“It is unfortunate that we are being portrayed as people working only for converting people to Christianity,” said Father Rocky Shah, public relations officer of Jhabua Catholic Diocese.

It is a fact that life as a Christian in this region has become increasingly difficult. Some Hindu groups such as Vishwa Hindu Parishad and Bajrang Dal are treating Christians as their enemies

The priest said he took the initiative and wrote in local newspapers explaining Christian worship and baptism, trying to clarify common misconceptions. “But nothing changed. The situation is such that our prayer services are being falsely depicted as religious conversion activity,” Father Shah told UCA News.

He recounted how a mob of over 1,000 tried to demolish a more than a century old grotto of Mother Mary on Nov. 10 in Thandla in their diocese, but the timely intervention of the police saved it. But the mob persisted with their demand for demolishing the grotto, alleging it was serving as a spot for conversion activities.

“Earlier, in September, they threatened to demolish churches that were built illegally at the district headquarters. They are now moving into the interiors. Timely intervention by the police saved us so far, but we are not sure what will happen tomorrow,” the priest said.

Auxiliary Bishop Paul Muniya of the Protestant Shalom Church said: “It is a fact that life as a Christian in this region has become increasingly difficult. Some Hindu groups such as Vishwa Hindu Parishad and Bajrang Dal are treating Christians as their enemies.”

He recalled how some pastors went to the house of a believer on being invited but ended up arrested and jailed for violating the state’s anti-conversion law. They were released on bail the next day but Christians continue to face increasing hatred and hostility.

In yet another incident on Nov. 8, a team of the National Commission for Protection of Child Rights (NCPCR) headed by its chairman Priyank Kanongoo carried out a surprise inspection in a Catholic girls’ hostel in Intkheri in Sagar Diocese.

An official released video footage on social media showing how they found copies of the Bible with the inmates, treating it as an attempt to convert them. The fact was the Bible copies were recovered from five Christian inmates among the 19 girls living in the hostel.

“The NCPCR ordered the girls to be sent back to their homes without even taking their statements. This clearly indicated that they had meant to target the hostel helping poor girls to continue their studies,” said Father Maria Stephen, public relations officer of the Catholic Church in Madhya Pradesh.

“The team did not have the required lady staff but still raided the girls-only hostel.”

In October, Hindu activists threatened to install a statue of Hindu goddess Saraswati inside a Catholic school in Satna Diocese, claiming that the management had removed an earlier one that existed on the campus.

“These incidents are meant to create a false impression of Christians as people who violate the law to convert people,” Father Stephen said. “Our decades of work to uplift the poor are portrayed as a facade to convert people.”

The priest said that if the allegations of conversions were true, then there should have been at least one case of a Christian being convicted of violating the anti-conversion law since its enactment in 1986.

Christians make up less than 1 percent of the 71 million people in Madhya Pradesh. Eighty percent of the population is Hindu while tribal people dominate in certain pockets.