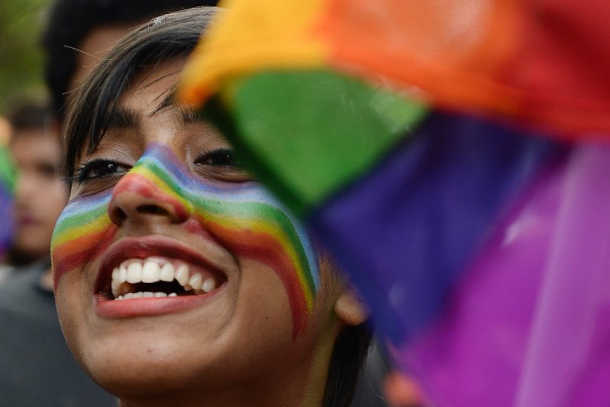 An Indian supporter of the lesbian, gay, bisexual and transgender (LGBT) community takes part in a gay pride parade in in Chennai on June 24. (Photo by Arun Sankar/AFP)

India's top court has begun hearing a case that could overturn a law criminalizing homosexual acts, which religious leaders fear may pave the way for same-sex marriages and upset social stability.

The five-judge constitutional bench headed by India's Chief Justice Dipak Misra began hearing a case on July 10 to check the validity of a law the British enacted in 1861 making "unnatural offenses" a crime punishable with 10 years in jail.  The law codifies this as "[voluntary] carnal inter­course against the order of nature with any man, woman or animal."

Navtej Singh Johar, a lawyer representing a group of plaintiffs challenging Section 377 of India's Penal Code, said the top court has through its past judgments made privacy a fundamental right of every citizen.

"The Supreme Court must protect the rights of sexual minorities. Sex is a part of human nature. How can it be a crime?" Johar asked.

In January, a three-member bench at the Supreme Court heard a petition filed by five people asking to review the controversial section of the law. The case was referred to a larger bench and help was sought from the federal government.

This sparked fresh debate among political and religious groups on the legal validity of same-sex unions.

However, the federal government led by the pro-Hindu Bhartiya Janata Party (BJP) said it would respect the court's decision.

"Let the court decide. Leave the decision to the wisdom of the court," Tushar Mehta, who is representing the government in court, told the media in New Delhi on July 11.

"We can't allow such insane things to take place in our country as same-sex couplings are not permitted in sacred Hindu scriptures," Swamy said.

Archbishop Leo Cornelio of Bhopal said the Catholic Church used to consider "same-sex unions as some kind of sickness and a sin" but "now understands it is merely a different [sexual] orientation."

Despite this, he said, marriage should remain a sacred contract between a man and woman "because God instituted it for building 'natural' families. Any challenge to this order would threaten the existence of humanity itself."

This echoes the views espoused by a leading Indian cardinal in 2012 after the Supreme Court of India restored a law banning homosexual acts.

"The Catholic Church has never been opposed to the decriminalisation of homosexuality because we have never considered gay people criminals," Cardinal Oswald Gracias, archbishop of Mumbai and then president of the Episcopal Conference of India, said at the time.

Cardinal Gracias, a member of the Council of Cardinals advising Pope Francis on curial reform, said the church remains "opposed to the legalization of gay marriage but teaches that homosexuals have the same dignity as every human being and condemns all forms of unjust discrimination, harassment or abuse."

In a more recent development showing the church's softening stance on gay rights, a church in Kerala last year formed a group of priests, nuns and laypeople to respond to the pastoral needs of transgender people.

But Maqsood ul Hassan Qasmi, the most senior Muslim cleric in India, said any move to legalize homosexual and lesbian marriages should be thwarted.

"After a few years some people may want to engage in bestiality. Do we agree they have the right to make that choice? Would people be within their rights to demand that, too, is legalized?" he asked.

Javaid Ahmad Qadri, an Islamic scholar based in New Delhi, said declaring homosexuality legal would threaten the secular character of India because it is offensive to the religious beliefs of both Muslims and Christians, whose respective scriptures forbid such acts.

Government figures submitted to the court in 2012 show that 2.5 million people in India identified as being lesbian, gay, bisexual or transgender (LGBT) six years ago.

But a number of human rights groups in the country claim the real number is much higher as most Indians refuse to come out of the closet, fearing rejection from their families or a social or professional backlash.