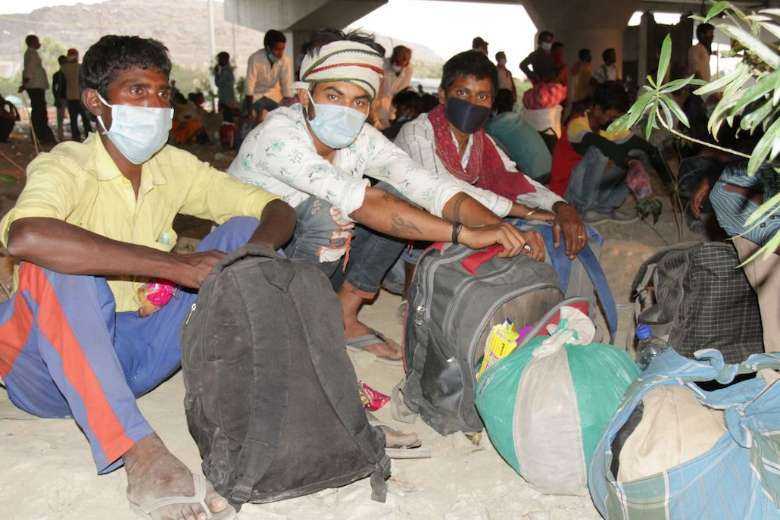 Migrant workers wait at the Delhi-Uttar Pradesh state border at Ghazipur on May 16, 2020, to go to their home states. (Photo: Bijay Kumar Minj/UCA News)

India’s Supreme Court has intervened for the third time in a year after it learned of the plight of migrant workers during the second wave of the Covid-19 pandemic.

The apex court said on May 24 that its main concern is that benefits and schemes meant for migrant workers must reach them.

The court also said it was concerned about the slow process of registration and asked the federal and state governments to expedite it for migrants and those working in unorganized sectors.

“The intervention from the Supreme Court was much needed because the federal and state governments have failed miserably to handle the case of migrants who are left to cope with hunger, diseases and struggling to go back home to their respective states,” Father Jaison Vadassery, secretary to the Catholic Bishops' Conference of India's Commission for Migrants, told UCA News.

The federal government had not learned from its mistakes last year when migrant workers were left in the lurch, resulting in hundreds of casualties, he said.

India should take the lead from other countries who have declared pandemic deaths as accidents so that insurance companies can provide compensation, he added.

Government expenditure towards the welfare of migrants shows millions of rupees, but the concern is whether it is reaching needy persons

“The government should also consider people who died of Covid at home as accidents because as of now it has considered only people who died in hospitals. Many could not reach hospitals for various reasons,” Father Vadassery said.

“The highest court has to come into the picture as it received input from organizations at grassroots level working for the welfare of migrants that the schemes and benefits were not properly implemented.”

During the May 24 hearing, Supreme Court judges Ashok Bhushan and M.R. Shah queried how the government will give dry rations to laborers who do not have ration cards.

They also asked the federal government’s counsel why there is no national data on workers in unorganized sectors and emphasized that data and a portal are essential to ensure benefits reach the needy.

"Government expenditure towards the welfare of migrants shows millions of rupees, but the concern is whether it is reaching needy persons," Shah said.

The court said the government should approach migrant workers to get them registered so that they would qualify for benefits if they lost their jobs during the pandemic.

According to the 2011 census, internal migrants account for 37 percent of India’s population.