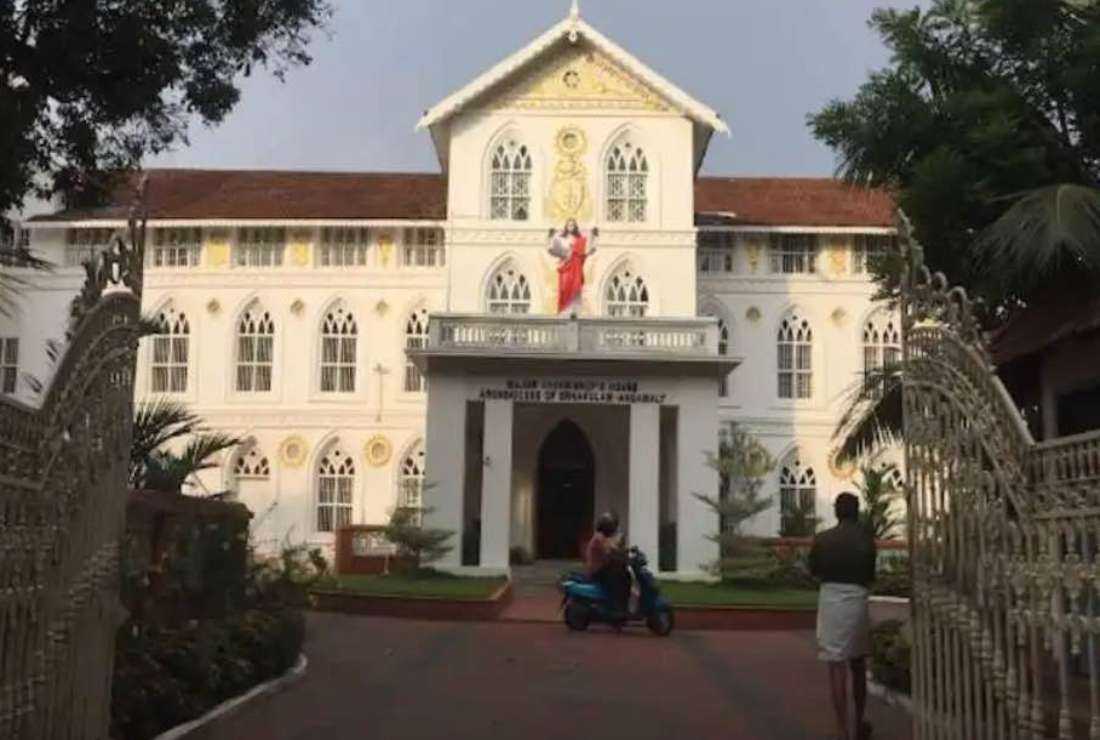 A visitor speaks to a guard outside the Archbishop's House of Ernakulam-Angamaly in Kerala's commercial capital Kochi. The Vatican on July 30 appointed a new administrator to the archdiocese amid an ongoing liturgical dispute. (Photo: UCA News)

The Vatican has appointed an apostolic administrator for an Eastern rite archdiocese in southern India where a decades-old liturgical dispute again got worse with the change in leadership.

The Vatican on July 30 appointed Archbishop Andrews Thazhath, an expert in the Oriental Code of Canon Law, to replace metropolitan vicar Archbishop Antony Kariyil in  Ernakulam-Angamaly archdiocese in Kerala.

Archbishop Kariyil was asked to resign by the Vatican for defying their Syro-Malabar Church Church’s supreme synod in the liturgical dispute.

“The change in leadership does not mean that we have changed our stand,” said Father Kuriakose Mundadan, the archdiocese's presbytery secretary.

Father Mundadan told UCA News on Aug. 2 that the priests and the laity in the archdiocese stick to their demand for conducting Holy Mass in the traditional way with the priest facing the congregation throughout.

“We have conveyed our stand to the new administrator,” Father Mundadan said.

"Winning over priests and laity will be a huge task"

He is reportedly tasked to end the dispute and implement liturgical unity by making priests of the archdiocese accept a liturgical formula approved by the bishops’ synod.

According to the synod-approved form, the Mass celebrant turns to the altar during the Eucharistic prayer, which archdiocesan priests refuse to accept. They want to continue their traditional way of facing the congregation though out the Mass.

Cardinal George Alencherry, the head of the Eastern rite Syro-Malabar Church, believes “the process to find a solution to the dispute has begun” with the appointment of a new administrator.

“The apostolic administrator will fix a date and begin to implement it [synod Mass],” Cardinal Alencherry told the media but said he was not sure when “it will happen.”

Church officials familiar with the developments say winning over priests and laity will be a huge task as the liturgical dispute had become an emotional issue.

The nearly five-decade-old dispute was revived in August 2021 when the synod of the Syro-Malabar Church reiterated its stand to implement a 1999 decision (of the synod) calling for uniformity in the liturgy.

A group of Catholics, led by some bishops, wanted to revive their ancient liturgy and wanted celebrants to face the altar, but some resisted it seeking liturgical renewal on modern lines.

The synod presented it as a compromise formula for fostering unity among the community members and ordered its 35 dioceses to comply with it with effect from November 2021.

It suggested the priest would face the congregation until the Eucharistic prayer, and then turn toward the altar until the communion, after which he would again face the faithful.

“An aggression towards the archdiocese by the Church leadership”

Barring Ernakulam-Angamaly archdiocese, other dioceses in India and abroad implemented the synod Mass despite voices of dissent against it from some priests and laity.

Archbishop Kariyil tried initially to enforce the synod Mass in Ernakulam-Angamli but relented to sustained protests by the priests and the laity who even resorted to a hunger strike.

He granted dispensation to the archdiocese allowing the traditional Mass.

The Archdiocesan Movement for Transparency (AMT), a joint forum of priests and laity in the archdiocese, in a statement termed the appointment of a new administrator as “an aggression towards the archdiocese by the Church leadership.”

AMT spokespersons Riju Kanjookaran told UCA News a delegation met the new administrator and urged him to give up the attempt to force the synod Mass.

The priests and the laity would be meeting on Aug. 7 to decide the future course of action.

Archbishop Kariyial was appointed vicar of the Major Archbishop for Ernakulam-Angamaly in August 2019 as the priests and laity demanded the resignation of Archbishop Alencherry following his alleged involvement in Church land deals, incurring a loss of about US$10 million to the archdiocese.

Cardinal Alencherry denied the allegations but reportedly admitted before the Church’s synod that there were administrative lapses and a lack of oversight on his part.

Cardinal Alencherry, therefore, was retained as archbishop but divested of all administrative powers. The priests and laity still continued to demand his removal as he was facing criminal cases related to the land deals.

Seventy-year-old Archbishop Thazhath, a close associate of Cardinal Alencherry, will continue as the metropolitan archbishop of Trichur Syro Malabar Archdiocese alongside his new assignment.