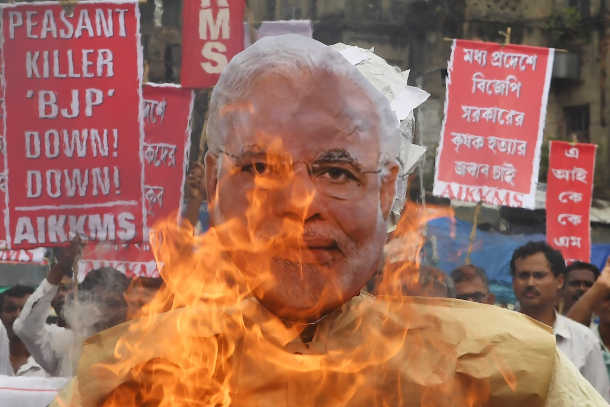 Farmers from Madhya Pradesh burn an effigy of Indian Prime Minister Narendra Modi during a protest in Kolkata in June 2017 against the government and over the deaths of farmers in the state. More than 1,600 farmers killed themselves in the state in 2016, according to official figures, but the Congress party has been accused of playing the religious card in the forthcoming election. (Photo by AFP)

Leaders of religious minorities and indigenous people in India's poll-bound Madhya Pradesh state say they feel betrayed after the secular Congress party made deliberate moves to appease the Hindu majority in its election manifesto.

Congress, the main opponent of the pro-Hindu Bharatiya Janata Party (BJP), released its 112-page manifesto on Nov. 10 with pledges on sensitive issues such as protection of cows, revered animals for most Hindus.

The manifesto promises to provide processing facilities for cow urine, more effective use of cow dung, more cow shelters, a campus for treatment of injured cows and facilities to offer the last rites to cows.

Congress also vows to develop a mythical route that Hindu lord Ram took during his exile in the area now covered by Madhya Pradesh, showcasing the so-called secular party's desperate attempt to get Hindu votes in the Nov. 28 state election.

"This is so strange that Congress has shifted from its secular agenda to a Hindutva [Hindu nationhood] agenda," said Archbishop Leo Cornelio, who heads the regional bishops' council.

The senior prelate said such promises were seen in the BJP manifesto but it was "difficult to believe they are part of the Congress manifesto now."

Christy Abraham, national general secretary of Rashtriya Isai Mahasangh, an ecumenical Christian forum, said the Congress manifesto "is a clear indication that there is no space" for religious minorities like Christians and Muslims, indigenous people and Dalit people in the state anymore.

Hindus dominate Madhya Pradesh, comprising 91 percent of its 73 million people, while Muslims form 6 percent. Christians number only about 210,000 and make no impact on electoral politics.

The fight is for majority voters and Congress "conveniently took the easy step" that the BJP has been following to retain power in the past 15 years, Abraham said.

"What kind of processing of cow urine will Congress do if is voted to power? I don't think they are serious but it helps to get the votes of poor people who do not think much," he added.

Mohammed Shoaib Siddiqui, a Muslim and senior Congress leader, told ucanews.com that he has sent a "dissent note" to the party's leadership "over the paradigm shift in the policy and programs of the party."

Political analyst and journalist L.S. Hardeniya said Congress lost power in the state in 2003 after a 10-year reign and could have bounced back to power "without much difficulties" had it addressed the "real issues" of majority people like farmers and tribal people.

More than 70 percent of the state's people depend on farming for a living, Hardeniya said. Price crashes of produce and repeated farm failures have increased the debts of farmers who are looking for government help, but Congress is playing the "most sensitive religion card."

Socially poor Dalit people, tribal people and other socially backward castes together form 87 percent of the population. Neither Congress nor the BJP has made any promise for their socioeconomic advancement in their "rush to win votes through religion," Hardeniya said.

"The BJP used to brand us as Muslim party. It's a conscious decision to shed that tag thrust on us by our rivals. Earlier, we did not do anything to change the perception," Singh told The Sunday Express.

"We are not a Muslim party, we are a secular party. But it's true that you can't win elections without taking care of the majority community."