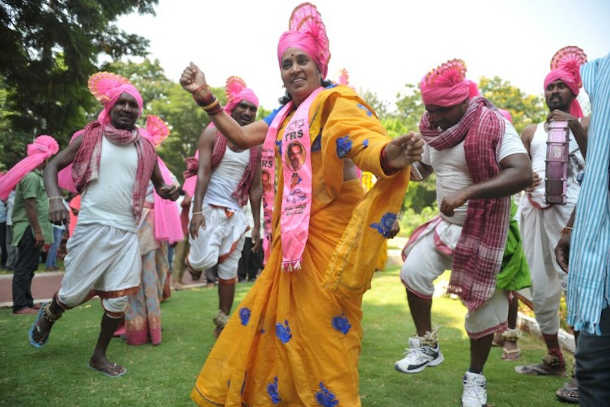 Supporters of Telangana Rashtra Samithi (TRS), a southern Indian state regional political party, dance at an election campaign rally in Hyderabad on March 25. India is famous for its rich and vibrant mix of cultures and religions. (Photo by Noah Seelam/AFP)

Fears of India evolving into a Hindu theocratic nation loom large as the pro-Hindu Bharatiya Janata Party (BJP) seeks a second term by placating Hindu sentiment ahead of the April-May parliamentary election.

Secular and liberal political groups say the poll will be be crucial in forging the future identity of the country, which defined itself as a secular-democratic nation after British rule ended in 1947.

"Hindu pride is the platform on which voters are being courted, which is a big concern," said Alok Verma, a rights activist in the northern state of Jammu and Kashmir.

The April 11 to May 19 elections will see 900 million eligible voters select 543 parliamentarians. The party with the most seats will govern the country for the next five years.

The BJP, in office since 2014, again finds itself pitted against the Congress party, its nemesis. But critics like Verma worry it is stoking religious intolerance and hate as a ploy to win over more Hindus.

They say the party's track record suggests it has underperformed, but few people are discussing how unemployment has spiraled under its watch, or how the agrarian crisis continues to worsen, with debt-ridden farmers reportedly committing suicide at a rate of one every three hours on average.

"Unfortunately, such issues are not being [widely] discussed," Verma said.

The BJP came to power promising more jobs and increased development for impoverished Indians with the slogan "Good days are ahead."

"But five years down the line, anyone who questions the BJP's failed promises is labeled 'anti-national' and 'pro-Muslim'. This is disgraceful," said Sheetal Nanda, a women's rights activist in New Delhi.

Never before has the call from political parties to make India a Hindu nation been so strong, she said.

"If the BJP wins again, it will pursue a mandate to amend the constitution, make non-Hindus second-class citizens, and declare the country a Hindu heartland," Nanda said.

New Delhi-based journalist and author Ashutosh Gupta said the BJP not only wants to change the charter and laws, but transform an entire civilization by establishing an upper-caste Hindu hegemony.

The party argues that, "Hindus were subjugated by Muslims and Christians for 1,200 years because Hindus were at that time non-violent and compassionate," Ashutosh said.

"They have pitched for the adoption of violent methods to make the dream of a Hindu heartland a reality," he added.

Critics say the violence meted out against Christians and Muslims over the past five years proves that Hindu groups have been laying the tracks to make India subordinate to a Hindu-centric ideology.

Government data shows communal violence jumped 28 percent between 2014 and 2017 with around 3,000 incidents recorded during that period, claiming almost 400 lives and injuring 9,000 people.

Moreover, 90 percent of the religious hate crimes recorded over the last decade occurred since current Prime Minister Narendra Modi led the BJP to power, according to the data assembled by Hate Crime Watch.

Hate crimes against minority groups are also believed to be rising as the election draws near.

Saheem Mir, an author and activist in Uttar Pradesh, cited the case of a Muslim father and son who were stopped on a road and attacked in this northern state on March 17.

"They were asked to chant slogans hailing Hindu gods and were forced to verbally abuse [Muslim-majority] Pakistan," he said. "These elements are taking such extreme measures because they know no one is going to act against them."

Others say that anyone who calls for enhanced dialogue to end India's outstanding disputes with Pakistan is branded a traitor.

Even cheering for Pakistan during a cricket match or expressing admiration for a Pakistani singer in a Bollywood movie puts people at risk of being tarred with a similar brush and denounced as "anti-national," rights activists say.

In fact, India's secular character will be permanently laid to rest if the BJP retains its grip on power, according to a recent paper by two research scholars who specialize in political science at the University of Kashmir.

"With the BJP government at the center, the secular tradition of India is under immense threat. If the threat isn't quelled at various levels, the idea of unity in diversity — one that the nation has always prided itself on — will soon be in tatters," according to the co-authors of the paper, Anayat Ul Lah Mugloo and Manzoor Ahmad Padder.

"If communal forces are not halted, India — regarded as the largest democracy in the world — will fall prey to what Joseph Schumpeter called 'creative destruction', which roughly entails the dismantling of age-old traditions by new ideologies — except that there would be nothing creative in the destruction of the inclusive idea of India."

Bishop Theodore Mascarenhas, secretary-general of the Catholic Bishops Conference in India (CBCI), told ucanews.com that people should vote for candidates and parties who respect the constitution, treat all citizens as equals, and protect minorities.

"Communities cannot live in hatred of one another. The danger of sowing hatred is that once it's sown, it gets out of control and nobody can tame it," he said.

"That's why it's so important the people who govern us shouldn't stay quiet when they witness such acts," he added.